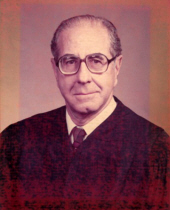 The Honorable Anthony 'Tony' V. DeMayo, 88, of East Haven died on December 10, 2012 at his home in East Haven surrounded by his family. Tony will be greatly missed by his loving wife of 61 years, Eileen Healy DeMayo. He was born in New Haven on April 27, 1924 to the late William S. and Aida Di Rocco DeMayo, Sr. Besides his wife, Tony leaves his two daughters, Elizabeth DeMayo of New York City & Catherine DeMayo and her husband Ian McGregor of Sydney, Australia; grandchildren, Marilena & Andrew DeMayo of Sydney, Australia and Sophia & Anthony DeMayo Schwab of New York City; brother, William S. DeMayo, Jr of New Haven. After graduating from West Haven High School, class of '41, Tony served in the US Army in India during WWII. In 1948 he graduated from Yale University with his B.A. before attending the University Of Connecticut School Of Law, and graduated in 1951. Tony's graduation marked the beginning of a long and prestigious career in law. He was admitted to the Connecticut Bar, and to practice before the U.S. District Court, the 2nd Circuit Court of Appeals, and the U.S. Supreme Court and practiced privately until 1977. From 1966 to 1981 he was Public Defender in New Haven County. He brought to the position a fierce belief in quality legal services for the poor and accused. Defender DeMayo did not shirk the hard cases and did not wilt under public criticism. By becoming the President of the Connecticut Women's Education and Legal Fund, before equality of treatment for women lawyers became a given in Connecticut, Attorney DeMayo helped pave the way for women to become fully fledged members of the Connecticut legal team. In 1981 Tony was appointed to the Superior Court, where whatever the assignment, he judged with distinction. He never stopped believing in fundamental fairness and that a legal system is best judged by how it serves its least popular, least affluent and least powerful. To say Tony was an active member of his profession is an understatement. Just a few of his accomplishments were Past President of the Connecticut Bar Association, New Haven Junior Bar Association, University of Connecticut Law School Alumni Association and Law School Foundation, Lecturer in Law at the University of New Haven, and a member of the Board of Governors of the Connecticut Bar Association. Tony also felt volunteering his time in the community where he worked and lived was important. He was involved with the Foxon Recreation League, Past President of Family Services of New Haven, member of New Haven Philatelic Society, former New Haven Chairman and State Vice- President of the Kidney Foundation, past board member of the New Haven Community Council and Regional Mental Health Planning Council, president of the East Haven Historical Society, involved with East Haven Lions Club, the founder of East Haven Kid's Stamp Club, former parish trustee and council member of the Church of St. Vincent De Paul, and former member of the East Haven Planning and Zoning Commission. Judge DeMayo didn't just practice law, he was passionate about it. Since he graduated from law school, there had not been a week, during which he had not worked ceaselessly to insure justice for all. He judged each and every case that came before him, with intelligence, knowledge, compassion, and often, when appropriate, great wit. Friends are invited to visit with Tony's family on Thursday, December 13th at BEECHER & BENNETT- TAYLOR FUNERAL HOME, 410 Campbell Ave, West Haven from 5:00 to 8:00 P.M. His Funeral Service will take place on Friday at the funeral home at 12:30 P.M. followed by a burial in St. Lawrence Cemetery.