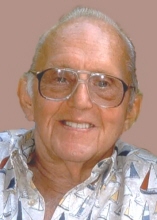 Theodore H. 'Ted' Trutnau, Sr., age 89, of Hamden, passed away on January 31, 2018. Born in New Haven on August 18, 1928, he was a son of the late Rudolph Sr. & Louise (Hoephner) Trutnau. Ted was predeceased by his wife Rosella M. (Richards) Trutnau, his sister Ruth de'Castillia, and brothers Rudolph Trutnau Jr. and Frederick Trutnau. He is survived by his daughter Carolyn Douglas & her husband Earle of Wallingford; his son Theodore Trutnau Jr. & his wife Dolores of Wallingford; grandchildren Christine Trutnau, Aubrey (Christopher) Hardy, Kevin (Courtney) Trutnau, Jeffrey (Leila) Douglas, and Michael D'Amico; and 3 great-grandchildren. Ted was a US Air Force Veteran of the Korean War and a self-employed mechanic for many years. He was a Past Master of the Mason's Connecticut Rock Lodge / Hiram Lodge # 1 AF & AM and a member of the Scottish Rite. A resident of North Haven for many years, Ted retired to Florida for 13 years before returning back to Connecticut in 2011. He always enjoyed dancing, his gardens, and playing cribbage, canasta, and dominoes with his family and friends. Friends may visit with his family on Monday from 4:00 to 7:00 PM at BEECHER & BENNETT FUNERAL HOME, 2300 Whitney Ave., Hamden. During this time, his Prayer Service will begin at 6:30 PM, followed by a Masonic Service. His interment will be private. Contributions in Ted's memory may be made to the St. Jude Children's Research Hospital, 501 St. Jude Place, Memphis, TN 38105 or to the Shriners' Hospitals for Children at www.shrinershospitalsforchildren.org.