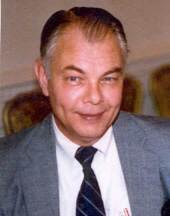 In Cheshire, April 15, 2006. Theodore Otto Palm of 150 Cook Hill Rd., formerly of North Haven, died after a long illness. Ted was born an American citizen on January 23, 1927 in Stuttgart, Germany, son of the late Otto H. Palm III and Hildegard Koener Palm. He was 12 years old when the family emigrated from Germany to America. Later he served his country in the U.S. Navy on the Aircraft Carrier U.S.S.Tarawa. After the Navy, Ted attended Stevens Institute of Technology in Hoboken, N.J. and graduated with a degree in Mechanical Engineering. In 1952, he married Phyllis Mossberg after meeting her at Summer Island in Branford and has since spent every summer there. He worked for the Scovill Mfg. Co. in Waterbury and then bought the Davis Electric Co., a company that manufactured wire and cable machinery and was successful in this business until his retirement. Throughout his life his greatest love was being with his family. In addition to his loving wife of 54 years, Ted leaves his daughter and son-in-law, Melody and Mark Mukon of Amston, CT, his grandchildren, Chelsea and Christopher Mukon, his daughter, April H. Palm of Manassas, VA, his brother and sister-in-law, Otto and June Palm of Branford, his nephew, Malcolm Palm of Milford and Malcolm's children , Eric and Emily. A Memorial Service will be held at the Elim Park Chapel, Saturday, April 22, 2006 at 11 A.M., with a reception immediately following. Arrangements with BEECHER AND BENNETT, 2300 WHITNEY AVE, HAMDEN. Memorial contributions are requested to be made to either Elim Park Baptist Home, 140 Cook Hill Rd., Cheshire, CT 06410, Attn: Development (to benefit the Long Term Care Facility) or VITAS Healthcare Corp. (Innovative Hospice Care), 1579 Straits Turnpike, Unit C, Middlebury, CT 06762.