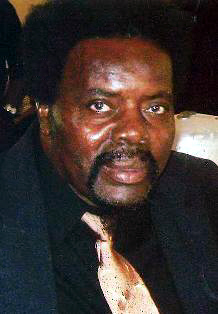 Theodore R. Holley Jr., “Joe,” was born in Merry Hill, NC, on November 14, 1939, to the late Theodore R. Holley Sr. and Erma Cofield Holley. Joe resided in Bertie County, NC, and later moved to Meriden, CT, where he transitioned to his final resting place on January 31, 2021.

Growing up down in Bal-Gra, Joe worked on the family farm. In his younger years, he enjoyed playing baseball while he attended W.S. Etheridge School in Bertie, NC. He graduated, fell in love and married Barbara Lane in 1963, and decided to move his family to Middletown, CT in 1965. He returned to NC in 1968 and resided in Colerain. Joe was a member of Oxley Hill Missionary Baptist Church in Merry Hill, NC. Joe drove a commuter van to Smithfield, VA, where he worked on the kill floor at Smithfield Packing Company for his entire 35 year career until he retired in 2006. Joe and Barbara rekindled their love and remarried in 1995. Joe was known as Uncle Joe to many, not just his nieces and nephews. He loved to wrestle and pick at everyone. He loved to hunt, play poker at Willie Lee’s, play Bid Whist, and keep his cars clean.  He loved watching TV, especially wrestling, and hogging the remote control as he slept. All these hobbies could not compare to his love of his favorite football team, the Dallas Cowboys.  Everyone that knew Joe knew that he was a faithful Dallas Cowboys fan. However, not even the Cowboys could compete with the love that he had for his wife Barbara, 30 years of love that will never fade.

Joe was preceded in death by his parents Theodore and Erma Holley, his former wife Vashti Leary Holley, his brother Augustus Holley, and his great-grandchildren Jamiz and Jamez Holley. He leaves to cherish his precious memories his loving wife Barbara Holley, three children Lillian “Renee” Winborne (Steve), Kenny Holley, and Jennifer “Joanne” Holley, all of Meriden, CT, three stepchildren, Tracy Holley and Yvonne Holley Stewart (Dante) both of Atlanta, GA and Benjamin “Alex” Hilton of Norwich, CT, thirteen grandchildren, eight great-grandchildren, his sisters Bertha Holley, Izabell Williams, and Alberta Holley, his brother John (Doris) Holley, all of Bertie County, NC, and his brother Samuel Holley of New London, CT. There are also a host of other family members and friends that will miss him dearly.

A funeral service celebrating Joe’s life will be held on Wednesday, February 10 at 12 noon in Beecher & Bennett-Flatow Funeral Home, 48 Cook Ave., Meriden. Friends are invited to visit with his family from 11 a.m.-12 noon before the service. Interment will be held in Pine Grove Cemetery, 857 S. Main Street, Middletown, CT. As a courtesy to those who were unable to attend, a recording of the service is available here: Theodore Holley Funeral, password to view: eF?08!*w