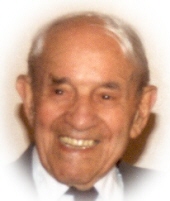 Meriden - Theodore T. Garoppolo, 98 of Meriden, peacefully left this world on Saturday, October 1, 2005 to join his beloved wife of 76 years, Alida(Lawrence) Garoppolo, his beloved daughter Dorothy Garoppolo Ogle, his son-in-law, Joseph W. Ogle and his grandson, Theodore T. Ogle in eternal rest. Teddy was born in New York in 1907 and met and married his beloved Alida in 1926 and they were happily married for 76 years. His only daughter, Dorothy, predeceased Teddy in 1969 and his son-in-law, Joe quickly followed in 1970. Teddy and Alida raised their four grandchildren as their own. The grandchildren along with his son will alway remember their grandfather and father, with love and appreciation, as he had always been the foundation of the family. Teddy is survived by his son and daughter-in-law John and Patricia Garoppolo of Manchester, his brother and sister-in-law, Joseph and Anita Garoppolo of New York, his sister Anna (Garoppolo) Valenza of Florida. He also leaves six grandchildren, Donna (Ogle) Laich, Joseph Ogle.Jr., Cheryl (Ogle)Morgan, Mark Garoppolo, David Garoppolo and Ruth (Garoppolo) Spellman, ten great-grandchildren, Melanie, Bryan, Stephen, Jacqueline, Valerie, Amy, Jeffrey, Gregory, Jason and Calena along with one great-great grandchild Taylor. Funeral service Monday, October 3, 2005 at St. John Lutheran Church, 520 Paddock Ave., Meriden at 11 a.m. Burial will follow at Walnut Grove Cemetery. Relatives and friends may call at the Beecher & Bennett-Flatow Funeral Home, 48 Cook Ave., Meriden on Sunday, Oct. 2 from 4-6 p.m. The family would like to thank the caring staff of Kensington Village and the nurses on Pavilion A at MidState Medical Center for making Ted's last moments comfortable. In lieu of flowers donations may be made to the American Cancer Society, P.O. Box 1004, Meriden, CT 06450.