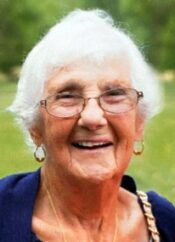 Theresa Cirillo Goldberg, 90, passed away peacefully on Thursday, October 6, 2022. She was the beloved wife of 59 years to Harvey Goldberg, who passed away in 2014.
Theresa was born in New Haven in October 1931 to the late Pasquale and Caroline Mangino Cirillo. She grew up in a loving family with four brothers and a sister. After getting married to Harvey, the love of her life, in 1955, they moved to Hamden, bought their first home, and began a family. Theresa held many jobs over the years, the last being at Yale University, where she worked until her retirement in 1991. She was an avid stamp collecter and truly devoted herself to it. She would spend hours working on her collection and going to stamp shows looking for just the right one. She also loved to travel. With her husband Harvey by her side, they would travel all over the world. Her favorite trips were to Italy and Greece, and an Alaskan cruise with her family. Theresa was passionate in her faith; a loyal and devout Catholic who would watch services on TV when she could no longer attend church. She loved playing cards, enjoyed reading, and was a serious mah jongg player.
Nothing was more important to Theresa than her family. She was a devoted, loving wife and a wonderful mother. Her grandchildren and great-grandchildren meant the world to her and it was such a joy to see her face light up whenever they came to visit. She loved when the family was together and always looked forward to the yearly Cirillo family reunions. Theresa will be dearly missed by her family and friends, but her spirit will live on in the hearts of everyone who knew her.
Theresa is survived by her 3 children, Elaine (William) Sorvillo, Mark (Carol) Goldberg, and Diane Knight; her grandchildren, Samantha and Aaron Partiss, Jennifer Mahoney, Rebecca Goldberg and Emily Knight; and her beloved great-grandchildren; Bret Martin, Katie Partiss, Nolan and Iris Mahoney and Paxton Clark. She also leaves behind her brother, Joseph (Francis) Cirillo, and sister, Carol (John) Boyhan. Theresa was predeceased by her grandson, Herbert “Herbie” Ronald Knight, III, and brothers John, Pasquale, and Robert Cirillo.
Visiting hours will be on Thursday, October 20th from 4 to 7 p.m. at BEECHER & BENNETT FUNERAL HOME, 2300 Whitney Avenue, Hamden. Family and friends are invited to go directly to Blessed Sacrament Church, 321 Circular Avenue, Hamden on Friday morning, October 21st, at 11 a.m. to attend a Mass of Christian Burial, and may also attend the committal service immediately following in Beaverdale Memorial Park, 90 Pine Rock Avenue, New Haven. In lieu of flowers, memorial contributions may be made to either the National MS Society, P.O. Box 4594, New York, NY 10163 or to the Meriden Humane Society, 311 Murdock Avenue, Meriden, CT 06450.