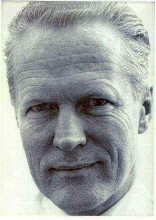 Wright, Thew, 92, died October 25, 2005. Born in Buffalo, Thew was a long time resident of the New Haven area. He was in the Yale class of 1936 and graduated from the Yale Law School in 1939. He volunteered for the U.S. Army in 1942 and was sent to the Pacific with the 27th Infantry Division. He saw action as a Ranger in the Gilbert and Marshall Islands, as well as Saipan, earning the bronze star, and was discharged as a Captain. He rejoined the firm of Wiggin and Dana where he worked until 1961, enjoying the court room most of all. In his later years, 'Doc' made friends throughout the U.S. and Mexico as he traveled in his van "Hebe" with his shitzu, Sam. He settled in Pensacola, FL and is survived by three of his children, Thew (Silver City, NM), Alexandra (Madison, WI) and Clinton (New York City, NY), and seven grandchildren. A memorial service will be held on Sat., Nov. 5 at 1 PM at BEECHER & BENNETT, 2300 WHITNEY AVE., HAMDEN, CT. Friends may call Sat. from 12 to 1 PM. Please bring a photo or remembrance to share. Interment with Military Honors will follow in Mt. Carmel Cemetery.