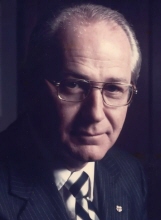 Thomas B. Peterson, 84, husband of the late Catherine Casagrande Peterson, formerly of Hamden, CT., died peacefully at his home in Stuart, FL on August 13, 2007, with his sons, Thomas and Michael, and caretaker, Maria Shanahan by his side. Mr. Peterson was born June 9, 1923 a son of the late Arnold and Maria Evers Peterson and attended both the University of Connecticut and Texas A & M before graduating from the University of New Haven with a degree in Accounting. He served with distinction in the Army's 83rd Infantry Division during WW II, earning a Bronze Star for valor and the rank of Major. He obtained his CPA and managed his private accounting business before joining CHR Industries as Comptroller in 1962. He became President and CEO of CHR in 1977 and retired, with that title, in 1987. Mr. Peterson was an All-State baseball player at Seymour High School and an avid golfer. He was a long-time member of the New Haven Country Club, where he served two terms as President. He loved all sports, and was a passionate Red Sox fan, who took great pleasure over their 2004 World Series Championship. Mr. Peterson is survived by his two sons and their families: Tom and Carolyn Peterson and their son, Tyler, and Michael and Cookie Peterson and their sons, Christopher and Matthew. He is also survived by his brother, Arnold Peterson, his brother-in-law, William Hunt, and many nieces and nephews. Family members, David and Josephine Wright, and Frank Gasson of Pocassett, MA., have provided Mr. Peterson with exceptional care, concern, and company over the past years. In addition to his wife Catherine, he was predeceased by his sisters, Nancy Pastore and Cinda Hunt. A memorial service will be held Saturday August 25, at 10:30 am at BEECHER & BENNETT 2300 WHITNEY AVE HAMDEN, CT. Friends may call before the service from 9:30 to 10:30 am. Entombment will follow in All Saints Mausoleum. In lieu of flowers memorial contributions may be sent to Hospices of Treasure Coast, 1201 S.E. Indian St. Stuart, FL, 34997 or to Intrepid Fallen Heroes Fund, West 46th St. & 12th Avenue, New York, New York , 10036. To send a condolence please see obituary @www.beecherandbennett.com.