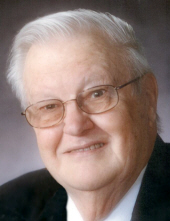 Thomas Heebner Perry, 96, of Cheshire, went to be with his Lord and Savior Jesus Christ on Monday, June 17, 2019. Thomas was born in Philadelphia, Pennsylvania on April 20, 1923 to Mary K. and Wayne L Perry. He answered his country's call during World War II, enlisting in the army air corps. He served in the 392nd Bomb Group of the 8th Air Force at the Wendling, England air base from 1943 -1945. After the war he resumed his education, graduating from Greenville College in Greenville, IL with both a BA and MA degree. He served in various education capacities before changing careers to construction accounting, working as a large construction projects office manager in various parts of the United States before retiring in Connecticut. He met the love of his life, Maria Bianca Lena Cota at a youth crusade in New Jersey, and they were married on May 26, 1956. Maria went home to be with the Lord on January 1, 1992. Thomas had three primary foci in life. One was serving the Lord Jesus Christ through teaching in Sunday School, leading youth groups, and financially giving to missions. The other was his family, driving thousands of miles each year throughout the US to visit his children and grandchildren during his retirement years until he gave up his car keys at the age of 92. His third passion was working as a researcher for B24.net. On this website, he would answer questions from family members searching for more information about their loved ones service or a student conducting research for a school paper. Thomas derived great satisfaction from helping these families gain information about their family history. Thomas is survived by his children, Tom (Sally) Perry of Dalton, Georgia; Jay (Cindy) Perry of San Antonio, Texas; Kevin (Penny) Perry of Plymouth, Minnesota; and daughter Regan (Paul) Huntley of Cheshire, Connecticut. Additionally, he is survived by 6 grandchildren and 11 great-grandchildren. Thomas was predeceased by his sister Lillian Hill and brothers Wayne Jr., Eugene, and Burton Perry. Friends may visit with his family on Friday, June 21, 2019 at BEECHER & BENNETT FUNERAL HOME, 2300 Whitney Ave, Hamden from 10:00 to 11:00 a.m. His funeral Service will begin at 11:00 a.m. in the funeral home followed by his burial with Military Honors in Centerville Cemetery, Hamden. In lieu of flowers, contributions in Thomas' memory may be made to Christian Missions in Many Lands at - CMML, Inc., P.O.Box 13, Spring Lake, NJ, 07762-0013.