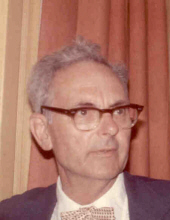 Thomas J. Bacon, 88, of North Haven passed away on July 7, 2011 after a brief stay at Connecticut Hospice. Born in Hampton, VA on March 4, 1923 to the late David L. and Maria Hart Bacon. He is survived by his loving wife of 66 years Ann (Andy) Bacon, sons John (Carol) Bacon of Deer Isle, Maine and Wilson (Leslie) Bacon of New Haven. He is also survived by grandchildren Julie, Neil, and Scott Bacon; siblings, Hugh Bacon of OR, Walter Bacon of North Branford, Elizabeth Oberg of Old Lyme, and Benjamin Bacon of Canada. Besides his parents, he was predeceased by a brother, David Bacon. Tom served in the US Army during WWII and was a survivor of the Malmedy Massacre of December 1944 where he was taken prisoner by the Reich. He worked for the State of Connecticut in Highway Acquisitions. He will be greatly missed by his family and all the friends he has made as a Boy Scout Leader and as a Volunteer Income Tax Advisor for twenty years at the North Haven Library. Tom will be fondly remembered as a charming man with a good sense of humor. Friends may visit with the family on Saturday, July 9th at BEECHER & BENNETT, 2300 Whitney Avenue, Hamden from 9 to 11 a.m. Services will be private. In lieu of flowers, donations may be sent to the American Cancer Society, 825 Brook St., Rocky Hill, CT 06067 or Sleeping Giant Park Association, PO Box 185340. Hamden, CT 06518 or sgpa.org.