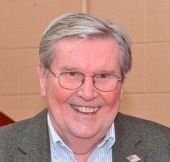 Thomas Joseph Walsh, 86, of Orange, husband of Shirley Moore Walsh for 65 years, passed away on August 1, 2009. He was born in New Haven on March 24, 1923 to the late Louise Sheridan Walsh Durlach. Tom proudly served his country in the US Army during WWII. He was a representative of Monarch Insurance Co. for many years before taking over the agency in Washington DC, where his family lived for 40 years. While in Washington he was the past president of the American Legion and a member of Kenwood Country Club. In 2000, he and his wife returned to Connecticut to spend their remaining years. Home at last. Besides his wife, Tom is survived by his sons, Thomas of Arlington, VA and Gary of New York; daughter, Karen Gay and her husband Stephen of LaPlata, MD; grandchildren, Jennifer Rison, Christopher Gay, and Ryan Walsh; great-granddaughter, Grace Rison. Also predeceased by his brother, Robert Walsh. A Mass of Christian Burial will be celebrated at Holy Infant Church in Orange at 10:30 a.m. on Saturday, August 8th. Interment to follow in Orange Center Cemetery. Friends may visit with the family on Friday evening from 4 to 6 p.m. at BEECHER & BENNETT, 2300 Whitney Ave., Hamden.