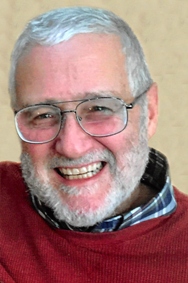 Rev. Thomas Lionel Samson, 63, of Trinity, FL passed away unexpectedly on March 25, 2022. He was the beloved husband of Judith Durdan. Born and raised in Meriden, CT, he was one of seven children of the late Leo William and Doris S. Rioux Samson. He was educated in the Meriden school system, graduating from St. Joseph School and Platt High School. After graduating he enlisted in the U.S. Navy, where he served for six years as the Chaplain’s Assistant before being Honorably Discharged in 1982.
One of Tom’s greatest passions was his faith. He graduated from Emery University, earning his Master’s degree in Divinity towards becoming a Methodist Minister. He was ordained as a Deacon in 1986, and then as an Elder in 1989. He served as a Pastor with the United Methodist Church Conference of Mississippi, working in primarily rural southern churches for 19 years. Tom was extremely proud to help better his church and to watch his parishes grow. His kindness and love for his parishioners was evident to all whose lives he touched. Even after becoming disabled in 2005, Tom continued to serve in the ministry until his final days.
Family was a very important part of Tom’s life, and he always looked forward to family gatherings. He would sneak in a friendly game of chess with whoever was up for a challenge. Most of all, he loved to laugh, always had a smile on his face and a funny joke or story ready to tell. Watching funny movies together was a must. While growing up, he would play George Carlin comedy albums and laugh until he cried. Tom was an avid Red Sox fan and would attend games whenever he had the opportunity. He also enjoyed going to concerts and was always knowledgeable of the histories of many different bands. Tom was a very sweet, kind soul who will be sorely missed by all who knew and loved him.
In addition to his wife, he is survived by his daughter, Elizabeth Samson; stepchildren, Chelsea Blanchard of Florida and Shawna (Wesley) Santos of Torrington; and two grandchildren who regarded him as ‘Pepe,’ Keila and Wesley Santos, Jr. He will also be dearly missed by his siblings, Paulette Berube, Laurette (Jerry Sr.) Crawford, Lydia (John Jr.) Belancik, and Lorraine Samson, all of Meriden, and Phillip Samson of St. Johnsbury, VT; nieces and nephews Donna, Richard, Tina, Jerry Jr., John III, Michelle, Jacqueline, Phil Jr., Marc and Paul; a special aunt, Jacqueline D. Samson of Kennebunk, ME; his dear lifelong friends Pete Cappellino and Bill Hogan; and many more cousins, nieces and nephews, great-nieces and nephews and extended family and many friends. He was predeceased by his sister Sylvia Nosal Monk, nieces Bernadette Berube and Valerie Nosal, and nephew Troy Nosal.
Friends may visit with his family on Friday, April 29th from 9:00 to 10:00 a.m. at the First United Methodist Church, 159 East Main St., Meriden and may attend his Funeral Service, which will begin at 10:00 in the church. Burial with Military Honors will follow in St. Laurent Cemetery.