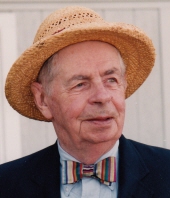 Thomas L. Cheney, 95, died peacefully with his family by his side on September 24, 2012 at Evergreen Woods in North Branford. Mr. Cheney was born in New York on May 8, 1917, the son of Thomas Langdon Cheney, Sr. of Manchester and Judith Stager Calkins Cheney of Cleveland, OH. Raised in Cleveland and Gates Mills, OH, he graduated from the Asheville School (NC) in 1935 and Yale College in 1939. He was employed at the Cleveland Museum, and during WWII, was a government contract coordinator at Thompson Aircraft Products in Euclid, OH. He received a law degree from Yale Law School in 1947. He was associated with Hirschberg, Pettengill in Greenwich for six years. In 1955, Mr. Cheney helped establish Davis & Cheney with Wendell Davis in Danbury specializing in estate and trust law. Their practice grew with partnerships and expanded to locations in Ridgefield and New Milford. The practice eventually merged to become the current Pinney, Payne, Van Lenten, Burrell, Wolfe & Dillman in Danbury where Cheney served as counsel for many years. A resident of Newtown from 1956 to 1978, Mr. Cheney was active in civic affairs and urban planning initiatives including preservation of open space for future generations. Notably, he aided in the expansion of the local land trust called the Newtown Forest Association. In 1958 he was instrumental in the adoption of zoning by the town of Newtown and prepared the town's first zoning regulations. He was counsel for the Borough of Newtown and participated in the formation of the Newtown Historical Society. He served as Chairman of the Board of Trustees for the Newtown Congregational Church and served for many years on the Board of Directors of the Danbury Hospital and Fairfield County Trust Company. In 1978 Mr. Cheney moved to Morgan Point in Noank where he resided until 2007. He continued to practice law into his 85th year. He was involved in the village, saying that his quiet life in Noank was better than any other he could imagine. He served on the Noank Harbor Management and Zoning Committees and was a member of the Mystic Congregational Church for many years. Mr. Cheney enjoyed boating, astronomy and nautical lore. He maintained a large hobby machine shop and was a talented furniture maker. He pursued learning, visited museums and avidly read books about history, culture and art. He traveled at home and abroad and documented these adventures in scrapbooks and photographs. He sustained family heritage and greatly valued his relatives. In 1998, as president of the Cheney Cemetery Association, he established the Cheney Family Fund at the Hartford Foundation. The Fund's purpose is to continue the family's support of culture and education in the area. He supported the Manchester Historical Society and the Hartford Athenaeum. Mr. Cheney was a Mason and a long time member of the Century Association and the Yale Club of New York. In 2007, Mr. Cheney moved to Evergreen Woods, a graduated assisted living community in North Branford. He enjoyed new friends and admired the caring staff for the five years he was in residence. Connecticut Hospice recently provided valuable services. The family is deeply grateful to his devoted health companion, Kimberly A. Currie, who was a source of joy for him. Mr. Cheney was predeceased by a half-sister, Patricia Bell Ramsey. He was married from 1940 to 1950 to Anne M. Suydam of Bayport, NY. They had two children who survive him, Knight Dexter Cheney IV and Carol L. Cheney, both of Hamden. He was married in 1952 to Phyllis S. Pannone of Riverside who predeceased him in 1992. They had two children who survive him, Prudence C. Dorazio of Noank and Faith C. Schoonmaker of Garfield, AR. A memorial service will be held at Evergreen Woods, 88 Notch Hill Road, North Branford on Sunday, October 21, at 3:30 p.m. In addition, a Celebration of Mr. Cheney's Life will take place in Noank later this year with details to be announced. Arrangements are by BEECHER & BENNETT, 2300 WHITNEY AVE., Hamden with private interment. Memorial donations may be directed to The Noank Historical Society, Box 9454, Noank, CT 06340 or The Manchester Historical Society, 175 Pine Street, Manchester, CT 06040.