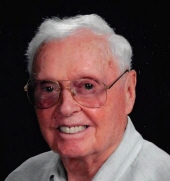 Thomas Mercer Thompson, 96, of Hamden, passed away at his home on Saturday, October 10, 2015 following a brief illness. He is survived by his devoted and beloved wife of 67 years, Elizabeth Ibsen Thompson. He was the loving and generous father of David I. Thompson of Hamden, Beth Thompson (Leonard Westra) of Brunswick, ME, and Jean (James) Fantarella of Hamden. Grandfather of Jay (Lauren) Westra, Kyle Thompson-Westra (Amanda Jichlinski), Johanna Thompson-Westra, David Fantarella and Diane Fantarella. He is also survived by his beloved nieces and nephews Richard Toole, Kathy Probst, Patty Hall, Judy Eskola, David Toole, Betty Ann Toole and their spouses. Nothing was more important to him than the time he spent with family. He was predeceased by his sister Ethel Thompson Toole, his brother-in-law Richard Toole, and a niece, Cheryl Toole Conte. Thomas was born in Bridgeport on February 1, 1919, the son of the late David H. and Marie Mercer Thompson, and proudly served in the US Army from 1942-1946 with the 9301st Technical Ordnance Unit as a Staff Sergeant. He received A.S. degrees from the University of New Haven and Southern CT State College, and an Honorary B.S. degree from the University of New Haven. Tom and the late Richard Toole, owned and operated Avis Rent-a-Car in New Haven for many years. He was honored to be asked to join the New Haven Rotary Club 54 years ago, and enjoyed the warm fellowship and service opportunities the club provided. He worshiped and served faithfully in the Trinity Church of Woodbridge congregation. He also was a member of the Humphrey Hook & Ladder Fire Association, the Hamden Art League, and Hamden Plains United Methodist Church. Most of all Tom was a man of unfailing optimism, faith, and generosity. He will be greatly missed by his family, dear friends, and all who knew him. Relatives and friends are invited to attend a Memorial Service on Saturday, October 17, 2:00 PM at the Trinity Church, 33 Center Rd., Woodbridge. Interment will be private. In lieu of flowers, contributions in Thomas's memory may be made to The Rotary Foundation, c/o The New Haven Rotary Club, P.O. Box 1737, New Haven, CT 06507 or Trinity Church, 33 Center Rd., Woodbridge, CT 06525.