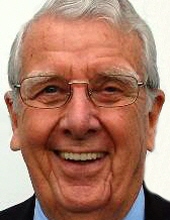 Thomas R. Brundage, Jr., 88, died at his Hamden home on July 17, 2019 with his wife of 65 years, Louise Anthony Brundage, by his side. He was born in Lynn, Massachusetts to the late Thomas R. and Mae A. Porter Brundage. Tom is survived by his wife, his three children; Laurence (Barbara), Gail (Timothy Brunker), and Eric (Kathy); and four grandchildren; Sean Brundage (Yelena), Martha Alimi (Olaoluwatoni), Theodore Brundage (Suchita), and Leslie Brunker. He was predeceased by granddaughter, Tonia Brundage Amato. Tom graduated from Northeastern University in 1953 with a degree in civil engineering. Upon graduation, he entered Navy Officer Candidate School in Newport, RI and then went on active duty as an Ensign. He retired as a Captain in the United States Navy Reserve after 30 years of service. He started his civilian career as a civil engineer, but soon switched paths to become a stock broker. He completed his brokerage career with Morgan Stanley in December of 2018. A 50+ year resident of Spring Glen, Tom served as a Boy Scout troop leader, sat on the board of the Naval War College Foundation, and was a longtime member of the of the Quinnipiac Club. He enjoyed tennis, sailing, and gardening. The family will be receiving guests at the Quinnipiac Club, 221 Church St., New Haven, CT at 4:00 pm on Saturday, July 20th. BEECHER & BENNETT, 2300 Whitney Ave, Hamden in care of arrangements. Contributions in Tom's memory may be sent to Naval War College Foundation, 686 Cushing Rd., Newport, RI 02841 OR www.nwcfoundation.org.