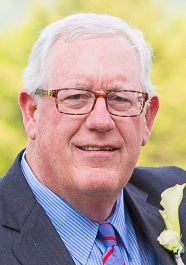 Timothy F. Pagnam, 73, of North Haven, husband of 48 years to Jane Mills Pagnam, passed away on July 25, 2022 at Yale-New Haven Hospital. Born in Southington on December 8, 1948, he was the son of the late Thomas S. and Julia Flynn Pagnam. In addition to his wife, he is survived by his sons, Flynn R. Pagnam and his wife Erica Oberg Pagnam and Lane T. Pagnam and his wife Ann Ballantyne Pagnam; daughter Taylor Pagnam Erickson and her husband Tyler S. Erickson; grandchildren Cecily and Bridget Pagnam, and Emma, Liam, and Caleb Pagnam; sister, Mary Pagnam; and brother and sister-in-law Charles Pagnam and his wife Betsy Benson Pagnam.
After graduating from Nichols College in MA, Tim joined his father Tom in growing and running many businesses in Hamden. An avid sports fan, he loved watching the Giants, Celtics, and Yankees; but his main passion in life, other than his family, was golf. Golf was everything, from discussions at the dinner table, to playing five days a week, the annual Cape Trip, and it always being on TV, golf was life.Tim was the driving force behind his family’s passion for skiing. Although he never stepped on the boards, he would drive his family to their Vermont home every weekend four months a year, for 30 years, a tradition that has now been passed down to his grandchildren.
Friends may visit with Tim’s family on Thursday, July 28th from 4-7 p.m. in BEECHER & BENNETT FUNERAL HOME, 2300 Whitney Avenue, Hamden. A Mass of Christian Burial will be held on Friday at 11 a.m. in Our Lady of Mt. Carmel Church. In lieu of flowers, contributions in Tim’s memory may be made to the Smilow Cancer Center at Yale-New Haven Hospital, c/o Office of Development, P.O. Box 1849, New Haven, CT 06508.