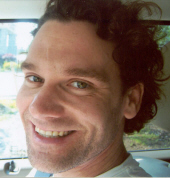 Todd Shane Swenson, 36, of West Haven, died on October 27, 2011. He was the son of Susan Ruickoldt Andersen of West Haven and the late Donald Andersen and William Swenson of New Hampshire. Todd was born on October 6, 1975, with his twin sister, Alexis Swenson Ybarra of Hawaii. He also leaves with sorrow, his sisters Melanie Swenson of West Haven, Merriel Swenson Green of VA, Kristen Andersen Arusiewiz of East Haven, Donna Moss of North Branford, his brother, Gary Andersen of West Haven and his uncle, Douglas Ruickoldt of West Haven. Predeceased by his uncle, William Ruickoldt. Todd was a kind, talented, caring person. He was a theater major at North Carolina School of the Arts after receiving valuable lessons from West Haven High class of 1995. His remarkable talent and love for the theater enabled him to star in 'The Goat' with Sally Field and Bill Irwin, on Broadway, a Tony Award Winner play. We will miss him all the days of our lives. Friends may visit with the family on Tuesday, November 1st at BEECHER & BENNETT-TAYLOR FUNERAL HOME, 410 Campbell Ave., West Haven from 6 to 8 p.m. followed by a Memorial Service celebrating Todd's life at 8 p.m.