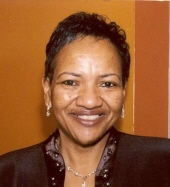 Tracey D. Boyd-Ellis, age 54, of West Haven, passed away on June 21, 2009. Tracey is the wife of 30 years to Richard A. Ellis, Sr; mother of Lauren Boyd-Ellis of Clinton, Maryland, Marcie & her husband Barry Diggs of West Haven and Richard Jr. & his wife Verna Ellis of Waterbury; grandmother of Richard Ellis, Brooklynn Diggs, Skylar Diggs & Ryenne Diggs; sister of Maureen Poindexter of Beaumont, CA, and sister in-law of Sharon Blue of West Haven. Tracey was born in New Haven on January 22, 1955, the daughter of George S. Boyd of West Haven and the late Shirley L. Boyd. Tracey was a 1973 graduate of West Haven High School. She was employed at Yale University for 25 years. Relatives and friends are invited to visit with her family at BEECHER & BENNETT FUNERAL HOME, 2300 Whitney Ave., Hamden on Friday, June 26, 2009 from 10:00 to 11:00 AM followed by her Funeral Service at 11:00 AM. Tracey's interment will be Private.