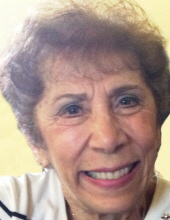 Valia C. Fusco, age 92, of Hamden, loving wife of the late William Fusco, passed away on April 3, 2020 at Midstate Medical Center in Meriden. Daughter of the late Ralph and Antoinetta Navarretta Affinito; she is survived by her daughter Judy Thibault (Michael) of North Haven, son Ronald Fusco (Patricia) of East Haven, sister Alma Esposito of Hamden, granddaughters Danielle Kowalczyk (Paul) of Milford and Bianca Marques (Matthew) of Durham, and sister-in-law Andrea Affinito. She is predeceased by her brother, Louis Affinito. Born in New Haven in 1927 on the Fourth of July, Valia was a proud patriot and true firecracker. She proudly volunteered at St. Raphael's Hospital as a candy striper while attending high school at Commercial High in New Haven. Valia married her Navy veteran sweetheart and professionally went on to work in claims at Century Insurance Company on Hartford Turnpike but was a performer at heart. She had a passion for dance; having performed on Broadway in her early years, polka danced in New Britain on Sundays with 'my Bill,' and tapped on many stages as a Twilight Tapper in Hamden. Her greatest joy was becoming a great-grandma (Gigi) in 2019 to Avery Marques and Cameron Kowalczyk, who she had the opportunity to care for and watch grow through their first milestones. Services are being privately held at St. Lawrence Mausoleum in West Haven, where she will be laid to rest with her husband William. Memorial contributions in her name may be made to St. Jude Children's Hospital, 501 St. Jude Place, Memphis, TN 38105, or by going to www.stjude.org.