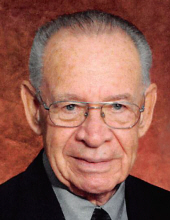 Victor Arthur Jackson, Jr., 84, loving husband of Beverly Alling Jackson, of Cheshire, formerly of Hamden, passed away on June 30, 2018. He was born on April 12, 1934 to the late Victor and Elizabeth Cummings Jackson. Along with his wife Beverly, he is survived by his children Susan (Steven) Sprowson and Gary (Theresa) Jackson, grandchildren Steven (Kristin) Sprowson, David Sprowson, Karlyn Jackson, and 3 great-granddaughters. He was predeceased by his brother Leigh W. Jackson. Victor was a 1952 graduate of Hillhouse High School and received an Associate Degree from New Haven College in 1954. In 1962, he was honorably discharged from the U.S. Army, having attained the rank of Sergeant. He was employed as a manager for Connecticut Medical Services/Anthem Blue Cross & Blue Shield for many years until his retirement. Victor loved traveling with his wife Beverly throughout the U.S. in their RV. He was a longtime active member of Whitneyville United Church of Christ Church in Hamden, Trumbull Masonic Lodge No. 22 AF & A.M., and New Haven DeMolay. Friends are invited to a Memorial Service celebrating Victor's life on Saturday August 11, 2018 at 11 a.m. at Whitneyville United Church of Christ, 1247 Whitney Ave., Hamden. Donations in Victor's name may be made to a charity of one's choice.