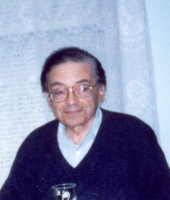 Victor H. Roston, 82, beloved husband of Flordeliza Bautista Roston of Hamden passed away July 2, 2012. He was born in New Haven Jan. 7, 1930, a son of the late John D. and Victoria Harold Roston and was a resident of Hamden since 1972. He was employed in the medical records department at Yale New Haven Hospital and retired as a supervisor in 1997 after 47 years. He was also a member of the Yale Glee Club, a member of the Knights of Columbus and the PAAC. In addition to his wife, he is 'Tata' to his children, Reynaldo (Sandra) Torreda, Nenita Torreda, Lolita (Joseph) Barbara and Marites (Jess) Siervo. Loving grandfather of Reynald, Santi, Raymond, Honeylyn, Jemar, Jessica, Jebrell, Geoffrey, and Reian. Uncle of Linda M. Chmielecki, Douglas, Donald and David Roston, great uncle of Elizabeth, Daniel, Chelsea and Caitlyn Roston. Victor was predeceased by two brothers, William and John D. Roston. Funeral from BEECHER & BENNETT, 2300 WHITNEY AVE, HAMDEN Saturday morning, July 7 at 9:30. Mass of Christian Burial will be Celebrated in Our Lady of Mount Carmel Church at 10 am. Friends may visit with his family on Friday from 4-8 pm. Interment in Beaverdale Memorial Park.