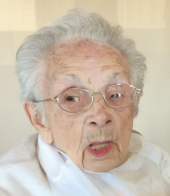 Victoria C. Bartiss, age 100, of Wallingford, formerly of West Haven passed away on March 7, 2017. Victoria was born on December 18, 1916 in West Haven, the daughter of the late Theodore Clarke & Victoria (Snyder) Clarke. She was the widow of Clifford L. Bartiss, Sr.; mother of Clifford L. Bartiss, Jr. & his wife Jane of Bruffton, SC and Thomas C. Bartiss & his wife Ann of West Haven; grandmother of Clifford Bartiss III & his wife Jackie, Thomas Bartiss & his wife Rose, Jennifer Bartiss-Earley and Lauri Bartiss-Neely & her husband John; great-grandmother of Tyler, Owin, Taylor, Emily, Gehrig, & Allison; and sister of the late Dorothea Forbers & Teddy Clarke. Victoria was a lifelong resident of West Haven and worked in the Cosmetics Department of the former Edward E. Malley Co. in New Haven for 19 years before retiring in 1980. She was a lifelong member of Christ Episcopal Church (Church of the Holy Spirit) in West Haven and was a member for many years of Eastern Star Golden Rod, Chapter #34 in West Haven where she has served as a Past Worthy Matron. Friends are invited to attend Victoria's Memorial Service on Saturday, June 10th at 11:00 AM in the Church of the Holy Spirit, West Haven. Her interment will be private. Arrangements are in care of BEECHER & BENNETT - TAYLOR FUNERAL HOME, 410 Campbell Ave, West Haven. Contributions in her memory may be made to; Church of the Holy Spirit, 28 Church St., West Haven, CT 06516.