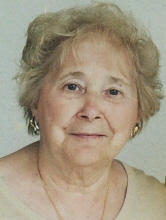 Victoria Girasuolo passed away peacefully in her West Haven home on December 13, 2009 after a short illness. She was predeceased by her husband Rocco Girasuolo, whom she married in 1940. A daughter of the late Michael and Margaret Rubano Civitello, Victoria was born in New Haven on March 6, 1921 and was a lifelong resident of West Haven. She had been employed as a seamstress by Chevron Ties in West Haven for many years. Victoria is survived by her children, Stella Greene, Rocco Girasuolo, Robert 'Jocko' Girasuolo and his wife Nancy, and Denise Rosenkrantz and her husband Stuart. She is also survived by daughter-in-law Annette Girasuolo; grandchildren Debra Gilhuly and her husband Dave, Richard Greene and his wife Kimberly, Michelle Girasuolo, Michael Girasuolo, Jr. and his fiancee Anna Bonaguiso, Stephen Girasuolo, Stacy Grussi and her husband Andy and Robert Girasuolo, Jr.; great-grandchildren Michael Criscuolo, Anthony Cunningham, Zachary Gilhuly, Alexis Gilhuly and Richard Greene, and siblings Michael Civitello and his wife Frances, Eleanor Nocerito and Grace Onofrio. In addition to her husband and parents, Victoria was predeceased by a son Michael 'Mickey' Girasuolo, a grandson Michael Greene, a brother Samuel Civitello, a sister Isabella Sousa, and brothers-in-law Dominic Nocerito, August Onofrio, and Raymond Sousa. Friends may visit with the family Wednesday, December 16th from 5-8 PM at BEECHER & BENNETT TAYLOR FUNERAL HOME, 410 Campbell Ave., West Haven. A funeral service will be held at the funeral home on Thursday at 10:30 AM. Interment will follow in Beaverdale Memorial Park, Sec. N, in New Haven.