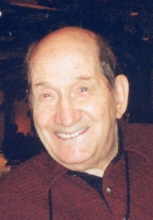 VINCENT J. CALVANEZI Vincent James Calvanezi, 89, beloved husband of the late Muriel Gibbons Calvanezi, passed away Dec. 13, 2010 in the Lord Chamberlain Nursing Home after a brief illness. He was born in the Bronx, NY, a son of the late Vincent and Helen Pavarnik Calvanezi, and had resided in Hamden for 20 years before moving to Stratford in 2008. Vincent proudly served in the US Air Force during WW II as a tailgunner and instructor, and was employed as a retail clerk prior to his retirement. He enjoyed Sports Haven, the NY Mets and the NY Giants. He is survived by a daughter, Helen Sweeney, of Monroe, two sons James Calvanezi and Thomas Calvanezi of Milford, a brother Joseph Calvan of Las Vegas, a niece Sharon O'Connor of Stratford, a nephew Craig Wilson of Phoeniz, AZ. In addition to his wife, he was predeceased by a sister in law Elizabeth 'Betty' Wilson, a brother in law Robert Wilson, and nephew Richard Wilson.. Funeral from BEECHER & BENNETT, 2300 WHITNEY AVE., HAMDEN, Friday, Dec. 17, at 9:30am. Mass of Christian Burial will be Celebrated in St. Stephen Church, Ridge Rd. Hamden at 10am.Friends may call Thursday from 4-7 pm. Interment with Military Honors in Centerville Cemetery.