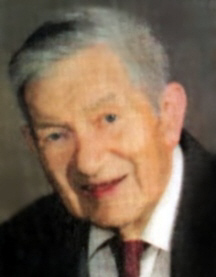 Vincent S. Kaszeta, age 100, passed away on January 4, 2021. He was born in New Haven on August 11, 1920, son of the late Julius and Amelia Valiakus Kaszeta. A longtime resident of New Haven and Hamden, Vincent attended Commercial High School and the University of Connecticut before graduating from Quinnipiac College with a degree in Business Administration. Before the start of WWII, Vincent had worked at Winchester Arms until 1942 when he enlisted in the U.S. Army Air Force. Vincent obtained the rank of Captain and his responsibilities included Staff Pilot and personal pilot for his commanding officer. During his six years in the service he logged 3200 flight hours. In 1948 he married Iva Pierce while still in the Air Force; and after the war they returned to Connecticut to make their home in Hamden, where they raised their two sons. Vincent was active in the Hamden Vol. Fire Company 9 West Woods, and worked his forty year career in all aspects of industrial manufacturing before retiring from Sikorsky Aircraft in 1985 and moving to Elim Park in 2008.
Vincent was predeceased by his beloved wife Iva in 2008, and by his eldest son Jerrold P. Kaszeta in 2016. He is survived by his son, Donald A. Kaszeta (Susan Flynn) of Killingworth; Jerry’s wife, Chris Kaszeta; a granddaughter, Jani Kaszeta Hyman (Timothy), and a grandson Scott Wickwire (Barbara and son James); as well as numerous nieces, nephews, grandnieces and grandnephews. Vincent is also survived by his dear friend and companion, Shirley Schiller of Elim Park, who brightened his last years and shared trips and adventures. He was predeceased by his siblings; Joe Kaszeta, Mary Mason, Helen Zanavich, Barbara Grady, and Millie Bethke.
A Memorial Service will be held at Saint Bridget of Sweden Parish, 175 Main St., Cheshire on Saturday, January 16th at 12:00. A private burial will take place in North Carolina at a later date. Memorial donations may be sent to the Elim Park Resident Benevolent Fund or Employee Emergency Fund, 150 Cook Hill Rd., Cheshire, CT 06410, or to a charity of your choice. BEECHER & BENNETT, 2300 Whitney Ave., Hamden is in care of arrangements.