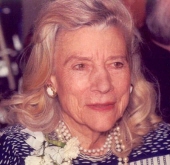 Mrs. Virginia (Bingham) Rice Johnson of New Haven, (100 York St., University Towers), died on January 22, 2008. She was born in Winchester, MA on March 14, 1911, the daughter of Edward Eggleston Rice and Carrie (Bingham) Rice. Mr. Rice, a summa cum laude graduate of Harvard, was a pioneer of group insurance in America. Mrs. Johnson was the widow of Lt. Col. Melvin Maynard Johnson, Jr., US Army (Reserve). Col. Johnson, who died in 1965, was a world famous authority on small arms, and was an inventor of several military weapons. He was listed in Who's Who in America. For many years, Mrs. Johnson was in 'Who's Who in American Women' as well as in the Boston and the national Social Registers. She was twice ranked number nine in U.S. Women's Tennis. She was also in the New England Women's Tennis Hall of Fame. She was a graduate of the Beaver Country Day School in Brookline, MA and was on the school's varsity softball and field hockey teams. She had lived in New Haven since 1949. Previously, she had lived in Brookline and in Boston, MA. She belonged to the Boston Sewing Circle of New Haven. A member of the New Haven Lawn Club, where she played tournament tennis, Mrs. Johnson also belonged to the Country Club in Brookline, and the River Club and the Regency Whist (Bridge) Club in New York City. Mrs. Johnson took an active interest in the Graduate Club in New Haven, where her son, Melvin Johnson III, is a former member. Also, she belonged to the Kebe Valley Club in Bar Harbor. She led a very active social life for many years in New Haven, New York and Boston, as well as in Bar Harbor, ME, and Narragansett, RI, during the summers. She was known for her lively personality and popular sense of humor. She could write amusing verses about her friends-which they enjoyed. He musical talents included piano-playing and modern dancing. In her younger years, she had studied ballet in Boston. Mrs. Johnson's daughter, Gail Virginia Johnson of New Haven, died on Sept. 25, 2007. Mrs. Johnson is survived three children, four grandchildren and three great-grandchildren. Her children are: Melvin Maynard Johnson, III of Upper Darby, PA; Edward Rice Johnson of Noank, CT; and Byron Bingham Johnson of Southbury, CT. Her grandchildren are Melvin Maynard Johnson, IV, of San Diego, CA; Shannon Elizabeth Johnson of Upper Darby; Lacy Kastner Johnson of Noank; and Lewis Burwell Johnson of Franklin Square, NY. Her great-grandchildren are: Elise Lauren Johnson, Derek Ryan Johnson and Chelsea Virginia Johnson. A Memorial Service will be held at 11 a.m. on Saturday, March 15, 2008 at Trinity Church on the Green in New Haven, CT. Arrangements under the direction of BEECHER & BENNETT, 2300 WHITNEY AVE., HAMDEN. 'During World War II, Mrs. Johnson was active in the British War Relief program. Contributions in her memory should be made to the American Red Cross, 703 Whitney Ave., New Haven, CT 06511 to help save American lives in the Iraq war.' Condolences may be mailed to the family c/o Johnson, P.O. Box 49, West Mystic, CT 06388.