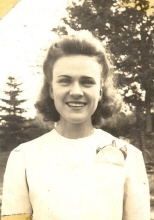 Bangor, Maine - Virginia 'Ginny' Harding Chaffee Godsoe passed away peacefully on Saturday, April 4th at Westgate Manor in Bangor. Born at home in Prospect, Maine on May 23rd, 1915, she was the daughter of the late Percival and Mildred Grindle Harding. She had been a resident of Bangor, Maine since 1993. Prior to this she lived in Meriden and was married to the late Roger T. Chaffee for 39 years. Virginia attended Prosect Ferry School and then Eastern Maine Conference Seminary in Bucksport, Maine, riding the ferry across the Penobscot River to school every day. She graduated in 1932 as valedictorian of her class. She went on to Eastern Maine General Hospital for Nurses in Bangor, receiving her nurse's certification from the State of Maine in 1939. She became a private duty nurse working in Bangor and Augusta. She met Roger Chaffee in 1940, married in 1942 and lived in Orlando, Florida and Washington, D.C. while he was in the Air Force. She then moved to Lancaster, PA where her children were born and then back to Roger's hometown of Meriden in 1956. While in Meriden she was a private duty nurse and worked for the Meriden Visiting Nurses Association. Virginia never truly retired from nursing. She was a familiar volunteer at bloodmobiles in the Meriden area for many years and also cared for many family members and friends. She was an active parishioner of the First Baptist Church of Meriden and the Wallingford Baptist Church. She traveled regularly with several of her friends to Elderhostels all over New England, and to Israel, Germany and Scandinavia. In 1992 she reconnected with her old family friend, William H. Godsoe. They married in 1993 and she left her Meriden home for Bangor. She has been at Westgate Manor there since 2001. On the day that she became a permanent resident she told us 'they need me'. She has been taking care of her patients ever since. Anyone that knew her knows that is what she did, take care of others. Virginia is survived by her daughter, Jane Crowell and husband Joseph of Wallingford, and her son, Dr.Roger Blake Chaffee and wife Dr. Martha Callaghan-Chaffee of Scottsdale, Arizona; her sister, Wilma J. Voss and husband Carrol of New Harbor, ME; her step-grandchildren, David Jackson of San Diego, CA, Debra Jackson of Los Angeles, CA, Sara-Jane Crowell (Jon Stine) of Meriden, Jill Pappallo (Douglas) and Stacy Crowell-Masi (Paul) of Wallingford and Joseph S.Crowell of East Longmeadow, MA. She also leaves 3 step-great-grandchidlren, Noah Crowell, Jordyn Papallo and Jackson Masi, and 12 nieces and nephews. She is also survived by our dear friend, Catherine Leavitt of Eddington, MA, whose care and guidance have helped Virginia and our family immensely and who has truly evidenced our mother's spirit of what it means to be a lifelong nurse and caregiver. She was predeceased by her husbands Roger T. Chaffee and William Godsoe, her brother, Edwin Harding and sisters, Elinor Berry and Frances Harding. A Funeral service will be held on Thursday, April 9th at 11 a.m. at the Beecher & Bennett-Flatow Funeral Home, 48 Cook Ave., Meriden. Relatives and friends may call at the funeral home on Thursday from 10-11am, prior to the service. Burial will follow in Walnut Grove Cemetery. The entire family would like to express their appreciation to the nurses and staff of Westgate Manor in Bangor for the extraordinary care that Virginia received for the past 6 years. In lieu of flowers, the family requests that contributions be made in Virginia's memory to the EMGH/EMMC/Husson College Nurses Alumni Association c/o Mrs. Gloria Lee, Treasurer, Goshen Rd. Winterport, ME 04496, or to Westgate Manor, Activity Fund, 750 Union St.,. Bangor, ME 04401 or to Project Excel c/o Rob Hunt, Washington Middle School, 1225 North Broad St., Meriden, CT 06450.