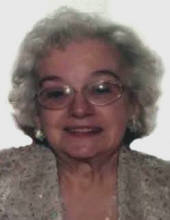 Virginia L. Stevens passed away on Saturday, December 29, 2018. Born in Massachusetts, Virginia moved to her grandmother's house in Cheshire; where she resided until marrying her high school sweetheart, Lee H. Stevens, to whom she remained married to until his passing in 2011. They moved to South Meriden, where they resided for most of their life. While raising two sons, Virgina waitressed at both Yankee Silversmith and Romano's restaurants, prior to opening a seamstress business in their home. Virginia, the oldest of nine, was born on March 29, 1925, daughter of the late Mr. and Mrs. Stevens. Virginia was an amazing mother to her sons, Mark Stevens of New Hampshire and Roger Stevens of Georgia; the adored grandmother of Jill Stevens of Florida and Lesley (Dubuc) Guerra and her husband of Thomaston. Together they have Virginia's two great- grandchildren, Ryan Stevens and Alex Leonard. She is also survived by her brothers Edward Dillon of Rhode Island and Ernest Dillon of Gales Ferry, and sister Bernice Courtney of Rhode Island. Virginia is survived by several nieces and nephews and great-nieces and nephews. In addition to her husband, Virginia was predeceased by her siblings Viola Stevens of Texas, Elizabeth 'Betty' Cowles, Eunice 'Cookie Massachusetts' Courtney of Rhode Island, and Jack Courtney of Massachusetts. Friends may visit with Virginia's family on Wednesday, January 2nd at Beecher & Bennett-Flatow Funeral Home, 48 Cook Ave., Meriden, from 5:00 to 7:00 pm. Funeral services at South Meriden Trinity United Methodist Church, 145 Main Street, South Meriden on Thursday, January 3rd at 10:00 a.m., followed by her burial in Walnut Grove Cemetery, where she will be laid to rest alongside her beloved husband, Lee.