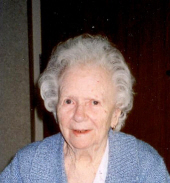 Vivian A. 'Pat' Brady Nocerino, age 92, of Hamden, formerly of Batter Terrace, New Haven, passed away on Dec. 2, 2011. Vivian was the widow of Giro George Nocerino. Born in Covington, KY on Nov. 28, 1919, she was a daughter of the late Elmer & Stella Smithe Brady. Vivian is survived by her son, Richard Scott Nocerino & his wife Carrie of Milford; her granddaughters, Amy Lynn Kimes of Shelton & Megan Rose Nocerino of Cheshire; grandson Brian Scott Nocerino of Milton, MA and her niece Laine Ellen Marshall-Weesner of KY. She was predeceased by her sisters, Orma & Lelia Marshall. Vivian was a book keeper, employed by the former Elm City Fuel Oil Company. Prior to that she was a secretary for the Singer Sewing Machine Company in Ohio. Her Funeral Service will be held on Tuesday, Dec. 6, 2011 at 10:00 AM in BEECHER & BENNETT FUNERAL HOME, 2300 Whitney Ave, Hamden. Friends may also visit with her family at the funeral home on Monday from 5:00 to 8:00 PM. Interment will take place in Beaverdale Memorial Park, New Haven.