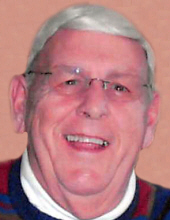 Walter Francis O'Brien, 85, passed away at St. Raphael's Hospital surrounded by his family on March 2, 2020 after a short illness. Born in New Haven on February 8, 1935 to the late Joseph and Josephine Servilla O'Brien. Husband of the late Theresa Iannone O'Brien. Walter was a long-time resident of Hamden until recently making North Haven his home. He was a proud Veteran, having served in the U.S. Army. Walter worked for many years at Safety Electric in Hamden and retired from AWISCO/Air Gas. Always an active member of his community, Walter coached for many years in the Hamden Fathers Baseball and Basketball Associations. He was a Past Grand Knight for Council 1 of The Knights of Columbus in New Haven. He was a Eucharistic Minister at both St. Barnabas Church and at St. Raphael's Hospital and The Grimes Center. Walt loved being around people and enjoyed his many friends at Carmen Romano Apartments in North Haven, where he organized Bingo and Pizza nights. Walter will be remembered by his sons and daughters-in-law, Daniel and Cynthia of Hamden, Timothy of Hamden, and Kevin and Ellen of Franklin, MA; and grandchildren Kayla, Joseph, Christopher, Connor and Edward O'Brien. He was predeceased by his brother Eugene. Our family would like to thank the North Haven Fire Department and AMR for their assistance in recent months and the staff and caregivers at Yale-New Haven St. Raphael campus for their compassionate care. Funeral from BEECHER & BENNETT FUNERAL HOME, 2300 Whitney Ave., Hamden on Friday, March 6th at 11:00 a.m. for a Mass of Christian Burial to be celebrated in St. Elizabeth of the Trinity Parish at St. Barnabas Church, North Haven at 11:30 a.m. followed by his entombment with Military Honors in All Saints Mausoleum. Friends may visit with his family on Thursday evening from 4:00 to 7:00 p.m. at the funeral home.