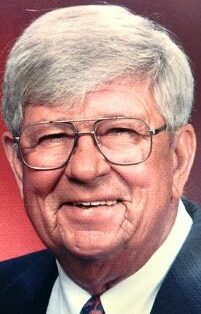 Walter George Shimchick entered into eternal life on Sunday, October 31, 2021, joining his bride Louise and daughter Debra. He died at his home in Morningside where his care was managed by daughter Cynthia Agro and son-in-law Joseph Agro of Milford, and son David Shimchick of New Haven. Walter enjoyed a quiet and peaceful year since Louise’s passing, spending many hours reading a series of spiritual novels and never needing 24/7 care. Walter died painless, blameless, and peaceful – the hope of every Orthodox Christian.
Walter was born in New Britain on February 5, 1933. He was the youngest child of George and Mary Shimchick, devout Orthodox Christians who both emigrated from Russia before the revolution. His siblings were brothers Alex and John and sister Jean Shimchick. Walter was an altar boy at Holy Trinity Church in New Britain, though he admitted to not always being angelic!
Sports became a productive outlet for Walter’s abundant energy and he credits a coach for mentoring him and encouraging him to go to college, which he did – the first in his family to do so. It was at Connecticut Teachers’ College that he met and fell in love with Louise. Daughter Cynthia arrived in the spring of their senior year.
After one year teaching and living in New Haven, Walter and family (which now included Debra) moved to Milford. Walter was a fixture and unmistakable, 6’4” flat-topped, presence at Milford High School where he taught drafting in close proximity to the gym. During those years he coached track and swimming. At that time there was no pool in Milford, so swim practice required a trip to the YWCA in Bridgeport. Walt’s teams were always highly competitive against schools from far more affluent towns where swimming programs flourished. Because of his success, female swimmers wanted a team of their own, and Walter was a pioneer in creating and coaching a girls’ swim team.
Walter was instrumental in ensuring a pool was included at Joseph A. Foran High School and was very involved with the design and layout of the facility. Walter transferred to the new high school when it opened in 1973 and taught mostly wood working and photography until his retirement in 1991, after a career lasting more than 37 years. At Foran he was the head of the Industrial Arts Department, and for many years he served as the Pool Director, where he scheduled the use of the facility and organized yearly Swim-A-Mile A-Thons to raise funds for scoreboards and electronic touch pads as well as other needed amenities.
During all these years there was rarely a summer when Walter was not working. In the early days, he was a counselor at Camp Clark where he was affectionately known as Chief Mud Turtle. Many summers he toiled doing home renovations, at both the family home and at the homes of others.
But Walter knew where and how to find pleasure and solace – out on the Sound fishing and boating. Walter enjoyed hanging out on his boat down at Spencer’s Marina in Milford, spending time fishing and lobstering and cruising the Sound. He and Louise especially enjoyed a yearly pilgrimage to Block Island where they docked at Payne’s Marina. The couple also traveled during retirement to Hawaii, Italy, Saint Thomas and Mexico.
Thanks to daughter Debra, both Walter and Louise began to attend services faithfully at Holy Transfiguration Orthodox Church in New Haven. Both became very active members and served on the Parish Council and Building Committees, and helped facilitate an annual bazaar. During a major renovation, Walter built wooden benches and bookcases and stands for liturgical objects. At the 100th anniversary of Holy Transfiguration in 2015, Louise and Walter received a gramata for their loving and dedicated service to the church.
A funeral service will take place at Holy Transfiguration Orthodox Church on Thursday, November 4th at 10 a.m. followed by burial at King’s Highway Cemetery. There will be a brief viewing time prior to the service, beginning at 9 a.m. BEECHER & BENNETT FUNERAL HOME, 2300 Whitney Avenue, Hamden is in care of arrangements.