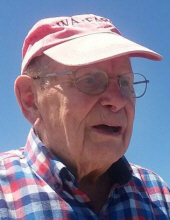 Walter Hart Bacon, 94, died May 7, 2019 in New Haven after a brief illness. He was born in Allentown, PA on January 9, 1925 to the late David and Molly Hart Bacon and grew up in North Haven, CT. During the Depression, the family rented out their home and moved to Cazenovia, NY, and lived in tents. Walter and his siblings grew vegetables and sold them from a rowboat around the shore of the local lake, earning money to buy the family's first radio. Walter's childhood in a large and sometimes rambunctious family gave him a demeanor that was not always in sync with accepted norms of behavior, especially in prep school. After more than one school tried and failed to keep him enrolled, he was accepted into a wartime program at the US Merchant Marine Academy at Kings Point, NY, graduating in 1945, thus earning the dubious honor of earning a College degree without having first earned a High School diploma. Walter's wartime experience included service on tankers in the Pacific. He married Peggy Redfield in 1946 and they resided in Branford and Guilford before building a house in North Haven, in which they would live for 60 years and raise four children. His career as a mechanical engineer included establishment of a very successful manufacturing company. He was awarded patents for several mechanical clutches. Walt was an accomplished skier, tinkerer, and sailor. He and Peggy sailed and motored their own boats on both US coasts and in the Bahamas. Walter was predeceased by his wife Peggy and son Kendall. Survivors include Philip Bacon (Alicia) of Guilford, Susan Clark (Patrick) of Tilton, NH, and Elizabeth Bacon of North Haven, as well as five grandchildren, two step-grandchildren and eight great-grandchildren. Walter is also survived by his sister Betsy and brother Ben, and was predeceased by brothers Tom, David (Dunny), and Hugh. The family wishes to express their thanks to all the wonderful friends and employees of Evergreen Woods for making the last nine years of Peg and Walter's lives filled with fun and laughter. Private arrangements are in the care of BEECHER & BENNETT, 2300 Whitney Ave., Hamden. Donations in Walter's memory may be made to the Evergreen Woods Employee Appreciation Fund or the Evergreen Woods Scholarship Fund, 88 Notch Hill Rd., North Branford, CT 06471.