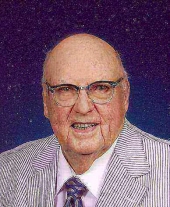 Meriden - Walter Henry Totzke, 87, of 83 Miller Ave., died Monday, December 26, 2005 at the Southington Healthcare Center. He was born in Meriden on September 21, 1918, a son of the late Herman Paul and Augusta L. (Kruth) Totzke. He proudly served his country during World War II in the U.S. Army. Walter retired as General manager of the Standard Plumbing and Heating Supply Company in 1991 after fifty-two and a half years of service. He was a lifelong member of St. John Lutheran Church where he served as an Elder and Past President and sang in the choir. He was a member of the Meriden Elks Club, Lodge#35, a charter member of the Farms Country Club in Wallingford and the Bulls and Bears. He is survived by several cousins, nieces and nephews. He was predeceased by a sister, Helen M. Totzke and two brothers, Edward and Robert Totzke A funeral service will be held on Wednesday, December 28 at 11:00am at St. John Lutheran Church, 520 Paddock Ave., Meriden. Burial will follow at Gethsemane Cemetery. Relatives and friends may call Tuesday (TODAY) at the Beecher & Bennett-Flatow Funeral Home, 48 Cook Ave., Meriden from 6-8pm. If desired contributions in Walter's memory may be made to the E. G. Rabe Scholarship Fund c/o St. John Lutheran Church, 520 Paddock Ave., Meriden, Ct 06450. To send a condolence please see obituary at www.beecherandbennett.com.