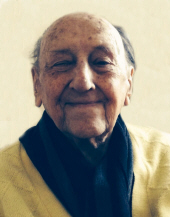 Walter Koslowski, of New Haven, passed away peacefully on August 9, 2016 at Whitney Manor in Hamden after a short illness at the age of 101. He was the husband of the late Gerda Koslowski and father of the late Renate Kristuf. Walter was born in Uelzen, Germany on December 13, 1914 to the late Johann and Magdalena Peters Koslowski. In June of 1969 he came to the United States of America to be with his daughter and son-in-law, Dagmar and Peter Fuhrmann of North Haven. He worked in Germany as a maitre'd and headwaiter in the finest hotels and restaurants in Heidelberg and Hamburg. An avid reader, he also enjoyed gardening and flowers, and mostly he enjoyed talking to people about traveling the world. He was admired by many friends and neighbors for his intellect. Besides his daughter, Walter is survived by his son-in-law, Norbert Kristuf; five grandchildren, Andrej, Sammy, Natascha, Sascha and Victoria Neiss; and great-grandson Philip Neiss, all of Germany. The family would like to thank Whitney Manor for their outstanding care and loving help during his stay. Private Services are in the care of BEECHER & BENNETT, 2300 Whitney Ave, Hamden.