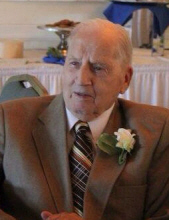 With his immediate family at his side, Wesley James O'Brien, Sr. of Fairy Glen Drive, North Haven, passed away peacefully on February 7, 2014, at the age of 102. He was the son of James A. O'Brien and Georgeina Shaw O'Brien. His two brothers, Andrew O'Brien and Dr. George O'Brien, predeceased him. Wes, born in New Haven on July 15, 1911, had the unique experience of a life that spanned the Machine Age, the Great Depression, the Atomic Age, the Information Age and five wars. He saw the administrations of 18 United States Presidents, witnessed the rise and fall of empires, of kings, of queens, and the birth of the automobile and the television. Shortly after graduating from high school in 1928, Wes went to work in his father's gas station. Under the 50-year stewardship of Wes and his brother Andrew, what began as a small neighborhood gas station, grew into one of the largest wholesalers of bicycles and bicycle parts in New England, James A. O'Brien and Sons. Still, what endures most vividly in the legacy Wes leaves is the memory of his overpowering love for family and its absolute value in his life. Wes first met his late wife, Elsie Cassidy, in 1931 at Arthur Murray's Dance Academy. His cousin Jack had convinced him that a good way to meet girls was to learn to dance. Although he never did learn to dance, the attempt was clearly not in vain, as it precipitated his strong and loving 68-year marriage until Elsie's death in January of 2004. Wes and Elsie had four children: Carol Smith (the late Lawrence Smith), Eileen Brown (Charles), Andrea Connolly (the late Joseph Connolly), and Wesley O'Brien, Jr. (the late Deborah Ward-O'Brien). His greatest delight in life was when he was surrounded by his grandchildren: Jennifer Gargano, Jane Pieper, Christopher Connolly, Daniel Brown, Elizabeth Connolly-Martell, Rachel Kuczma, and Cassidy O'Brien. His eighth grandchild, Wesley James O'Brien III predeceased him. Twelve great-grandchildren also survive him. With the proverbial Irish twinkle in his eye, he would tease, cuddle, coach, and listen; but most of all, love them unconditionally. But stretching well beyond his immediate family, Wes' heritage includes countless children and grandchildren who are very much his by 'mutual adoption,' further proof of his undying love for all young people. Along with his family, the greatest identifier in Wes' life was his Christian faith and lifelong membership in the New Haven Seventh-day Adventist Church. Commitment to his Savior was not a passive one; he held many positions in the church such as Church Elder, Sabbath School Superintendent, Youth Leader, and Sabbath School teacher. Above all, however, was his enduring love for Christian education and, specifically, Laurel Oaks Adventist School, a satellite of the New Haven Seventh-day Adventist Church. During a search for a new school site, Wes and Elsie located the property in Hamden where Laurel Oaks presently sits. Upon the church's purchase of the 6-acre plot, and upon the school's establishment, a lifelong dream was realized. Wes served a 35-year stint as treasurer of the school, and often volunteered his time to read with the children there, in order that young people 'might be taught of the Lord.' To honor Wesley O'Brien, Sr., family and friends are invited to attend his funeral at the New Haven Seventh-day Adventist Church, 355 Humphrey Street, New Haven, on Monday, February 10, at 11:00 a.m. with Pastor Warren Ruf officiating. Calling hours will take place on Sunday, February 9, from 4:00 to 7:00 p.m. at the Beecher and Bennett Funeral Home, 2300 Whitney Avenue, Hamden. Should friends desire, contributions may be made to Laurel Oaks Adventist School, 14 West Shepard Avenue, Hamden, CT. 06514.