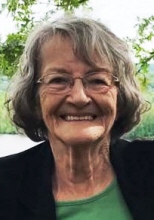 Wilifred “Willie” Alberta Smith Cork passed away peacefully surrounded by family on August 19, 2017 in Putnam, Connecticut, after a brief illness. Willie was born on January 16, 1938 at home in Mt. Carmel, Connecticut. She was predeceased by her parents, Frederick Smith and Gladys Crowther Smith, and her brother, Russell Smith, all of Hamden, Connecticut. To know Willie was to understand that family was the center of her life, and everything radiated out from there. Most of us have a mirror on our bedroom wall to show us our reflection as we get ready to face the day. Willie’s bedroom walls, and indeed all the walls of every home she lived in, reflected her life back to her in photos of the people she loved best: her husband Bob, her six children, Bill, Pam, Rob, Jim, Dan, and Jason, her grandchildren and great-grandchildren, as well as friends and her beloved cats, past and present, Cuddles, Max, and Sancho. In everything she did Willie’s caring and giving heart shone through, and many of her interests were things she shared with her children or learned from them. After graduating at the top of her Licensed Practical Nurse class from Eli Whitney Regional Technical School in Hamden in 1965, she enjoyed a long and varied career in nursing, something she shares with her daughter Pam, working in nursing homes, hospitals, and a state mental health care facility. Her passionate advocacy for the people of Palestine grew out of her visit to Israel and Palestine in 1999, where she and Bob observed her son Dan’s work and spent time with the family of Iyad, one of Dan’s friends, a young second generation Palestinian refugee whom she grew to regard as her “sixth son.” Willie listened to stories of Palestinians throughout the West Bank, and was captivated by the visits to the holy sites in Jerusalem and Bethlehem as well. This visit enhanced her faith and gave her a new outlook on international affairs. Through her activism she became friends with people all over the world who shared that passion. Willie was also a voracious reader, and when something sparked her interest she would read everything she could find on the subject. Her love of family history, particularly the history of the Civil War and the roles her ancestors played in that great conflict, is one of the many things she shared with her oldest son, Bill, who also inherited her intellectual curiosity and passion for knowledge and truth. The Internet could not have come at a better time for Willie, as it gave her an even greater opportunity to read, learn, and grow. Like her son Jim, she was always fast to recognize the benefits of new technology. Willie was an early adopter of Facebook, which she instantly realized would give her the ability to keep in even better touch with friends and family, near and far; and to reconnect with friends from long ago with whom she had lost touch. Willie had a gift for friendship, and the ability technology gave her to find old friends and reestablish contact, as well as to make new friends, was something she cherished. She loved the years that she and Bob spent living in Florida. Being close to their youngest son Jason, and being able to see him and his growing family often brought her great joy. She also got a kick out of emailing family living further north about how lovely and warm the weather was in Florida, during the bleak and cold New England winters. Through Jason, she developed a greater appreciation of music and theatre, and developed a wide-ranging taste in music, and also shared with him her deep and abiding faith in God. Willie’s years in Florida also afforded her the chance to learn more about the space program, a passion of her son Rob. She enjoyed learning about the history as well as being able to see some of the last few shuttle launches. She is survived by her husband of 56 years, Bob Cork, originally of Terre Haute, Indiana, her children Pam (Eddie), Bill (Joy), Rob (Linda), Jim (Jessica), Dan (Marie-Ange), and Jason (Melissa), as well as fourteen grandchildren, two great-grandchildren, and her beloved cats, Max and Sancho. She is also survived by a sister, June Smith Corraro, (Richard), of Cheshire, Connecticut; and also by brother-in-law Tom Cork, (Joan) of Chicago, and sister-in-law Marge Hinners (Gene) of Chicago, as well as many beloved nieces and nephews. She will be dearly missed by all who knew her. Friends and family are invited to an informal gathering to celebrate Willie’s life at New Haven Seventh-day Adventist Church on Tuesday, August 22 at 6:30 p.m. 355 Humphrey Street, New Haven. A funeral service will be held on Wednesday, August 23 at 11:00 a.m. at Beecher & Bennett Funeral Service, 2300 Whitney Ave, Hamden, followed by a burial in the State Veterans Cemetery in Middletown. Contributions in Willies memory may be sent to If Americans Knew @ www.ifamericansknew.org.