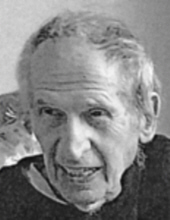 Willard S. 'Bill' Platcow, 90, passed away at Yale-New Haven Hospital on April 18, 2020. Born April 2, 1930 and raised in New Haven, he was the son of the late Philip E. Platcow, a former Sixth Ward Alderman of New Haven, and Mollie Penn Platcow. Bill spent most of his adult life in New Haven before moving to Hamden. A proud U.S. Veteran, Bill served his country in the Korean War. He attended Yale and Fairfield Universities and received his Masters Degree from the University of Bridgeport. He became a prominent educator in the New Haven and Hamden school systems, and later a well-respected professor at Gateway Community College, where he taught until his retirement. Bill is survived by his loving sister, Florence S. Platcow, and was predeceased by his sister Evelyn Penn Platcow. His enjoyment of music and likeable personality will be missed by all who knew him. Graveside services will be privately held. Arrangements in care of BEECHER & BENNETT, 2300 Whitney Ave., Hamden. To send condolences to Bill's family, please visit www.beecherandbennett.com.