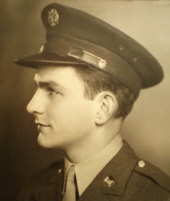 Meriden - William A. Leck, 87, died at Westfield Care Facility on April 2, 2009, after a prolonged illness. Born July 2, 1921 to Adolph and Eva Leck, Bill grew up and lived most of his life in Meriden, CT. He worked as a professional lithographer & printer - trades he learned from his father - at Horton's Printing Co. in Meriden prior to World War II. Later, Bill became an industrial arts teacher at Cheshire's Correctional Facility and then returned to the printing trade as lithographer, teacher & consultant for a variety of local printing companies until retirement and beyond. Bill was a proud U.S. Army Veteran, having served in England, France, Germany and Belgium during World War II. He met Arline 'Arch' Chase, the love of his life, soon after the war ended and they married in 1947. Arline, son Bill and daughter Deb survive him. Along with many happy memories he created, Bill leaves behind numerous loving relatives, including cousins Barbara Kidney of Westport, CT and David Leck of Lakewood, CO; sister-in-law Ruth Chase Johnson of Meriden, brother-in-law Luin Chase of Meiden, brother-in-law Robert Chase & wife Irene of Florida; several nieces including Donna Lacourciere (formerly Rees) and Judith Johnson of Meriden, and several nephews including Allen Johnson of Raleigh, NC. He was predeceased by his sister Eleanor Leck Lacourciere, formerly of Meriden. There is not enough room to include all of Bill's relatives, and please know Bill loved you all. Bill was an avid Yankee fan and enjoyed many life-long friendships. They include Walter 'Pep' and Barbara Patzke of Meiden, Gloria Patzke of Meriden, and Sarah & Manny Ferdinand of MA. He is predeceased by best boyhood pals William 'Bud' Mullen and Henry 'Ziggy' Patzke, originally of Meriden. Hardly a day went by that he did not bring up Bud & Zig's names. These pals and their spouses referred to themselves as the 'F Troop'. With Bill as their captain, this troop of unruly, fun-loving friends turned life into a riotous circus on their many escapades together. Bill also kept in touch with his Army buddies; and in his book they were all 'Aces' His daughter Deb is forever grateful for her Dad's razor-sharp wit that endured even through the most challenging & painful of times. Anyone who knew Bill will miss this aspect of him the most. According to Bill's wishes, he asks you to endeavor to make someone happy every day. A Memorial Service will be held on Tuesday, April 7 at 10:00 am at Hubbard Chapel at Walnut Grove Cemetery, Meriden. The Rev. Susan DeSousa will officiate. In lieu of flowers, memorials may be made to the local VFW, the Red Cross, or to a Charity of your choice. The Beecher & Bennett-Flatow Funeral Home, 48 Cook Ave., Meriden is in charge of the arrangements.