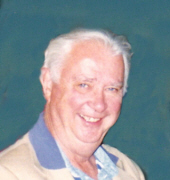 William 'Bill' Breen Dahill, died peacefully at Connecticut Hospice on March 6, 2014 after complications from a surgery two weeks earlier. Bill was born January 20, 1936 in Worcester MA. He grew up in Hartford, then Hamden, listening to opera played in the house by his mother Bride. He was the youngest of 5 children born to the late Maurice and Bridget Shortell 'Bride' Dahill. Bill rebelled in his own way and became the only Yankee fan in a family of Red Sox fans, a passion he passed on to his wife and three children. He attended Notre Dame High School in West Haven, 1950-54. Bill starred on the ND Baseball, Basketball and Football teams (where, among other things, he blocked for future NFL player Nick Pietrosante). He graduated from Providence College in 1958 with a BS in Business Management. At Providence, Bill played on the baseball and basketball teams. Bill was ROTC, and then after boot camp in Fort Benning Georgia he was in the Army Reserves and National Guard. Bill then met the love of his life, Elizabeth 'Betty' P. Schmitt, and married her in Hamden in 1961. Bill and Betty purchased a home in the Spring Glen section of Hamden where he lived for the rest of his life. Bill has three children and two grandchildren. Son, William F., born in 1962, is an attorney in New York City where he lives with his wife Tara. Son, Kevin, born in 1964, is the Executive Director of not for profit Counseling in Schools, who also lives in New York City with his wife Rachel Dahill-Fuchel and their children - Bill's beloved grandchildren - Jake,18, a freshman at Skidmore College and Georgia, 14, an aspiring ballet dancer at Ballet Hispanico. Daughter, Heather, born in 1972, is in social media marketing and advertising in New York City. Bill worked his entire career in sales in the heavy machinery quarry and crushed stone industry. He worked for many years at New Haven Trap Rock, including through acquisitions by Ashland Oil, Tomasso and Tilcon. He then worked for years, up to the time of his passing, at W.H. Milroy & Co. Bill's interests included family, travel, sports, opera and time with his friends, of which he was blessed with many. He was very active at St Rita's parish, including being a Eucharistic Minister and member of the RCIA team. Bill was predeceased by brothers Maurice 'Moose' and Bobby 'Lefty'. He is survived by his brother, Joseph of Bradenton, FL and sister, Ann Griggs of New Britain. Bill was also predeceased by his wife Betty in 2001. Not a day passed when he did not miss her and cherish her memory. They are together again. Funeral from BEECHER & BENNETT, 2300 Whitney Ave, Hamden, on Monday, March 10th at 9:30 a.m. followed by a Mass of Christian Burial at 10:00 a.m. in St. Rita's Church. Burial will follow in All Saints Cemetery. Friends are invited to visit with his family on Sunday evening from 4:00 to 7:00 p.m. at the funeral home. Donations, in lieu of flowers, may be sent to Connecticut Hospice, 100 Double Beach Rd, Branford, CT 06405 or Counseling in Schools, 505 Eighth Ave, Suit 12A-06, New York, NY 10018 or www.counselinginschools.org or Notre Dame High School, 24 Ricardo St, West Haven, CT 06516 or www.notredamehs.com/onlinegiving.