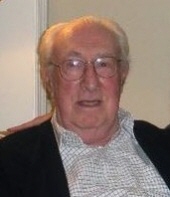 William B. Fieseler (Bill), 84 of Wallingford died peacefully on January 1, 2015 at MidState Medical Center. He was the loving husband of Helen Fieseler for 62 years. Bill was born in New York City on July 1, 1930 to Bernhard and Helen Koburger Fieseler. He graduated from Brooklyn Technical High School and earned his bachelors degree in electrical engineering from Brooklyn Polytechnic Institute. He married Helen on December 27, 1952. Bill served faithfully in the U.S. Army during the reconstruction of Japan following WW II. Bill was a loyal employee of the General Electric Company, working as a sales engineer in the Connecticut/New York area, for 38 years. Bill and his family moved from New York to Norwalk in 1962, where he and Helen lived before moving to Ashlar Village in Wallingford in 2007. Bill's interests included baseball, especially the Yankees, all sports, music, especially Sinatra, boating, traveling and the New York Times Crossword Puzzle. Bill was an honest, dedicated and faithful man who gave his best to all he did. He had a loving heart and will be greatly missed by those who knew him. Besides his wife, Bill leaves a sister, Bernice, of Trumbull, along with two sons, Robert (Mary Ellen) of Naperville, Illinois and Richard of North Haven. He also leaves four grandchildren, Bobby, Lauren (Brendon), Billy (Lauren) and Annie. He leaves two sisters-in-law, Dorothy Schmitt Nevins of The Villages, Florida and Lori Steininger-Schmitt of Oakland, New Jersey, along with many nieces, nephews and other relatives. There will be a memorial gathering in Bill's honor at a later date. Burial is private. Contributions to honor Bill's memory can be made to the GE/Elfun Community Foundation, 3135 Easton Turnpike, Fairfield, CT 06828 or the New Haven Register Fresh Air Fund, c/o New Haven Register, 100 Gando Dr., New Haven, CT 06513. Arrangements in care of BEECHER & BENNETT, 2300 Whitney Ave., Hamden.