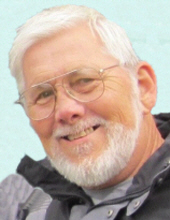 William E. 'Boody' Liedtke, 76, of Guilford, passed away peacefully at his home with his family by his side on April 10, 2020. He was born in Meriden on August 10, 1943, son of the late William A. and Edna (Hallbach) Liedtke. Bill honorably served in the U.S. Navy during the Vietnam War as a Boilerman Petty Officer 2nd Class, traveling the world on the aircraft carrier U.S.S. Enterprise. He went on to a career as a Plants Operational Manager for the State of Connecticut. He worked at several locations, including Central Connecticut State University and New Haven Mental Health Facility. Bill enjoyed a long retirement in a house he custom-built out of a small cottage overlooking Lake Quonnipaug. He could often be found hanging out on the deck with family, friends, and loved ones. He loved to fish for trout on the lake from his boat named 'Tooch'. He was a long-time member of the Indian Neck Yacht Club in Branford where he docked his other boat and played many hands of Setback with friends. He was a competitive rifle shooter belonging to the New Haven Sportsman's Club, Silver City Gun Club of Meriden and the Middletown R&R Club, and participated in matches throughout the Northeast U.S. and Canada. For many years he coached the rifle team at Wilcox Technical High School. Bill was an avid Red Sox and UConn Women's Basketball fan and loved watching and cheering for both teams. He was a lifetime member of the VFW and the National Rifle Association, and belonged to the Emmanuel Lutheran Church in Meriden. Bill is survived by his son William A. Liedtke and daughters Michelle Liedtke and Bonnie Liedtke-McIntyre and husband Scott McIntyre; the mother of his children Betty Peterson; his sister Mary Liedtke Robitaille and her children and grandchildren; his partner Joan's children Sherri Ferraiolo, Jo-Ann Little, Kathy Manchester and husband Steve, and Andrew Little and wife Sherri; and Joan's grandchildren Michael Ferraiolo, Brandi Mullen, Lynn White (Harold), Megan Little, and Thomas and Daniel Manchester. Bill was predeceased by his beloved long-time partner Joan 'Tooch' Little, his brother Freddie Liedtke, and his brother-in-law Eugene 'Babe' Robitaille. The Liedtke family would like to thank the dedicated staff at Yale New Haven Hospital Saint Raphael Campus for their compassion and loving care for William and his family in this difficult and uncertain time. A memorial service celebrating his life will be held at a later date. Beecher & Bennett-Flatow Funeral Home, Meriden is assisting with the arrangements. Memorial donations in Bill's name may be made via check to the New Haven Sportsman's Club Youth Scholarship Program at 4158 Durham Road, Guilford, CT 06437.