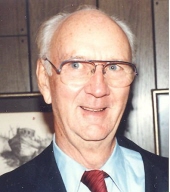 Meriden- William E. Holmes Sr., 96, husband of the late Marion (Wolf) Holmes passed away peacefully on Friday, January 9, 2015 at MidState Medical Center. He was born October 21, 1918 in Meriden a son of the late Edward and Freida (Hoffman) Holmes. William proudly served his country in the U.S. Navy during WWII and returned to Meriden and worked as a die cutter for International Silver for 43 years, retiring in 1980. He was a member of the American Legion, Post 45 and loved bowling and golfing with his wife. He is survived by a son William E. Holmes Jr. and his wife Charlene of Wolcott, a daughter, Sharon K. Ritchie and her husband Arthur of St. Petersburg, FL, two grandsons, Kristopher W. Holmes and his wife Tabetha Jordan of Lake Wylie, SC and Kyle R. Ritchie and his wife Ashley of St. Petersburg, FL and a great-granddaughter, Rylan Ritchie of Florida. A memorial service and burial at the State of CT Veteran's Cemetery in Middletown, CT will be at the convenience of the family in the spring. The Beecher & Bennett-Flatow Funeral Home, 48 Cook Ave., Meriden has been entrusted with the arrangements.