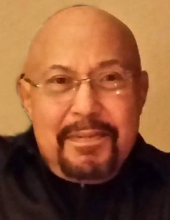 William H. Chambers, age 66, of East Haven, passed away at Yale-New Haven Hospital on August 17, 2018. Born in New Haven on March 31, 1952, he was a son of the late Walter H. and Mary (Andrews) Chambers. He is survived by his daughters; Tabitha & her husband Ivan Torres of East Haven and Dawn Farrell of Port St. Lucie, FL; three grandchildren, Ivan W., Brielle and Layla Torres; his sister, Patricia Shaughnessy of Fall River, MA and his brother Walter D. Chambers of Warwick, RI. William was predeceased by his sister Valerie Jacobs and brother Robert Chambers. A longtime resident of East Haven, he worked as a welder and metal fabricator for nearly his entire life. He greatly enjoyed dancing and weight training. He was a very spiritual being, keeping his faith until the very end. Friends may visit with his family at BEECHER & BENNETT FUNERAL HOME, 2300 Whitney Ave., Hamden on Thursday, August 23rd from 12:00 noon until 1:00 PM, at which time his Prayer Service will begin. Burial will be private. In lieu of flowers contributions in William's memory may be made to Animal Haven, 89 Mill Rd, North Haven, CT 06473.