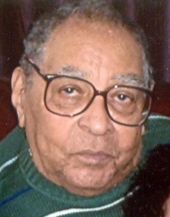 William H. Jackson, 93, of New Haven passed away Dec. 22, 2007 in the Haven Health Care after a brief illness. Mr. Jackson was born in Hamden June 19, 1914, a son of the late John Henry and Anna Allen Jackson and was employed by Liggett's Drug Store in New Haven in his earlier years. He also worked in the dining room of Tower One while he resided there. He was predeceased by sisters Inez Abram, Mary Davis and Jacqueline Harrison, and brothers George, James, John and Edward Jackson. Mr. Jackson was known as 'Uncle Bill' to everyone. He previously lived in Tower One and had a way with the ladies. He referred to people as 'darlin'. In his earlier years, he traveled extensively to places such as Denmark and London. He enjoyed making people laugh and everyone who came in contact with him, loved him. Funeral service will be Saturday, December 29 at 9 am in the BEECHER & BENNETT-TAYLOR FUNERAL HOME, 410 Campbell Ave., West Haven, Elder Luther Barnes presiding. Friends may call prior to the service from 8 - 9 am. Interment in Hamden Plains Cemetery.