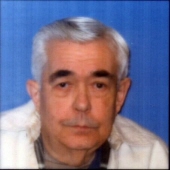 William Henry Martindale, Jr. of Ann's Farm Rd, passed away Sunday February 15, 2009 after a brief illness. He was born in Hamden December 1, 1929 a son of the late William H. and Margaret M. Cote Martindale, Sr. and served in the US Navy from 1948-1952, aboard the aircraft carrier USS Coral Sea as a photographer. Mr. Martindale was employed at the Knudsen Dairy which became Marcus Dairy for over 40 years prior to his retirement. He is survived by two daughters, Marianne Rossitto, her husband TJ, of Colebrook, NH, Debra Wildermuth of Meriden, two sons, William H. Martindale, III, his wife Wendy of Hamden with whom he resided, Michael W. Martindale, his wife Debbie of Meriden. Also surviving are 6 brothers, Robert Martindale, his wife Charlotte, of Hamden, Donald Martindale of Naugatuck, Richard Martindale of NH, Edward Martindale, his wife Mary Ann, of Wallingford, George Martindale, his wife Debbie of NC, Charles Martindale, his wife Lucille of North Haven, and a sister Margaret Martindale of Wallingford. He is also survived by several grandchildren, great grandchildren, nieces, nephews, and his long time special friend Annie Matheson of Wallingford. Mr. Martindale was predeceased by a grandson William H. 'Billy' Martindale IV, and sisters in law Nancy and Phyllis Martindale. His family would like to thank the Doctors, Nurses and caregivers on floor 5-2 at Yale New Haven Hospital for their compassionate care. Service of interment with Naval Military Honors will be Friday February 20, at 11 am in the Centerville Cemetery, Washington Ave. Hamden. Arrangements in care of BEECHER & BENNETT, 2300 WHITNEY AVE. HAMDEN.