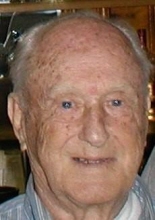 William Hull Smith of North Haven passed away on July 19th in Durango, CO at the age of 97. Born May 3, 1915 in New Haven to Sarah Lynch Brown Smith and Frank M. Smith, he was a long time resident of Hamden before moving to North Haven. Bill had a long, distinguished career as a master gunsmith at Winchester Repeating Arms Co., continuing his craft well after retiring from the company in 1978, having accrued a nationwide reputation. He proudly served his country in WWII as an Army Staff Sergeant in the European and Pacific Theatres. He had a zest for life, as well as a passion for boating and being with family and friends. Bill is survived by his son Brian and his wife Susan of Durango, CO, his son William and his wife Linda of Brookfield, CT, six grandchildren and five great-grandchildren. He was predeceased by his loving wife Eileen Duffy Smith, his daughter Leslie S. McManus, brother Frank Smith, sister Helen Smith Grafer, and half-siblings Arthur Brown, Thomas Brown, Edward Brown, Maude Brown, Sarah Brown Geraty and Gertrude Brown Grimley. Memorial service at BEECHER & BENNETT, 2300 Whitney Ave., Hamden on Thursday, July 26 at 10 a.m. Bill's family will receive relatives and friends Wednesday from 5 to 8 p.m. Entombment in All Saints Mausoleum in North Haven.