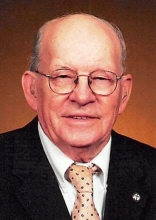 William John McGaffin, Sr. (Bill) passed away peacefully on July 22, 2017 at the Connecticut Hospice in Branford. Bill was born on June 8, 1921 in North Battleford, Saskatchewan, Canada, son of the late James R. McGaffin Sr. and Nellie Matthews McGaffin. He is survived by his beloved wife of 69 years Eleanor Post McGaffin; ten children: Joyce Gagnon (Allen), William Jr. (Lila), George Sr. (Irene), Richard (Janet) and Elizabeth Wieler, all of West Haven, David of Hamden, Mary Hatt of New Haven, Barbara Krwpinski (Anthony) of Yulee, FL, James (Rebecca) of Poole, GA and Margaret Neff (John) of Concord, NH. He is also survived by his brother David McGaffin of Pittsfield, ME; and sister Emilie Baker of Tiverton, RI; 20 grandchildren and 22 great-grandchildren. He was predeceased by his son-in-laws James Wieler and Vaughn Hatt; daughter-in-law Mary Jane McGaffin; brothers James Jr., Robert, and Hugh; and sister Sarah. Bill moved to Houlton, ME with his family at the age of five and grew up there. He joined the Civilian Conservation Corps and then came to CT to work at Armstrong Rubber. He was then drafted in to the U.S. Army while living in West Haven. He served in the Army 1st Armor Division under General George Patton driving tanks in Tunisia, Sicily, Naples, Rome and Southern France. He coincidentally met his brother James in Italy and they spent a night together in a foxhole. Bill went on to work for C.S. Mersick Co. and later for Foote School as the head maintenance man until he retired. Bill was an active member of First Congregational Church in West Haven where he served on boards and was an usher for 35 years. Relatives and friends are invited to Beaverdale Memorial Park, 90 Pine Rock Ave., New Haven, on Thursday July 27, 2017 at 10:00 AM for a committal service with Military Honors. A memorial service for Bill will follow at 11:00 AM at the First Congregational Church, 1 Church St., West Haven. In lieu of flowers, memorial donations in Bill’s name may be made to Book of Remembrance, First Congregational Church of West Haven, 1 Church St., West Haven, CT 06516. To share a condolence with Bill’s family, please visit www.beecherandbennett.com