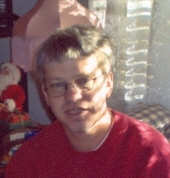 Meriden- William L. Priebe, 47, husband of Patricia (Kramarz) Priebe passed away on Tuesday, October 21, 2008. He was born November 7, 1960 in Meriden a son of the late Howard W. and Shirley (Hubball) Priebe. He attended local schools and graduated from Platt High School and from Middlesex Community College with an associates degree in Business. He was previously employed with AT & T. Billy was a sports enthusiast, he was an avid runner, even running in the Boston Marathon several times. He was a die hard Red Sox fan and wouldn't miss a Cleaveland Browns or UCONN Husky game. He was a loving husband, father, son, brother and friend who will be deeply missed by all who knew him. In addition to his wife Patricia, he is survived by his four children, Erica, Alexandra, Zachary and Nicholas Priebe all of Meriden, five sisters; Gayle Priebe, Marlene and her husband James Bevacqua, Lynn and her husband Richard Trombley , Karen Mingrino all of Meriden and Wendy and her husband Richard Silverman of Middletown, and one brother, Howard Priebe of Meriden. He also leaves his nieces and nephews, Jeff Priebe, Amanda Trombley, Paul and Danny Mingrino and Olivia, Emma and Garrett Silverman. A funeral service will be held on Monday, October 27 at 11:00 a.m. at the Hubbard Chapel at Walnut Grove Cemetery, Meriden. The Rev. Susan DeSousa will officiate. Burial will follow in Walnut Grove Cemetery. Relatives and friends may call at the Beecher & Bennett-Flatow Funeral Home, 48 Cook Ave., Meriden on Sunday, October 26 from 4-7 p.m.