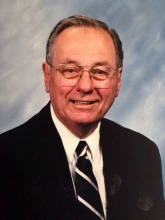 William Louis Fivek of Hamden passed away peacefully Nov. 14, 2013. He was born in Oak Park, Ill Jan.13, 1929, a son of the late William and Jewel Kotora Fivek, and resided in Hamden. He was a former AT & T executive who retired after 41 years of service. He received a degree in Mechanical Engineering from Bradley University in 1951. His first wife of 45 years, Rita Chandler predeceased him. He is survived by his wife, Anita Larsen Sullivan-Fivek; brother, Richard Allan Fivek of Concord, MA; children, Christopher Allen Fivek of State College, PA; Deborah Lynn Kostrowski of New Providence, NJ; and William Ray Fivek of Midlothian, Va. He leaves 5 grandchildren, Jennifer Brown, Brian Kostrowski, Olivia Fivek, Emma Fivek and Emily Fivek, and great grandchildren Hunter and Parker Brown. He is also survived by 3 step daughters, Laurie S. DeLio, Deborah S. Fuller, Tamra S. Dodds, and 11 step grandchildren. Bill was a member of the Lutheran Church of the Good Shepard, and a former President of the congregation. He was a former chairman of the Saint Raphael Foundation Board, was active with the Auxiliary, and a Take Heart Volunteer. He proudly served in the US Army during the Korean War from 1951-1953 and was a member of the technical staff that developed the curriculum to train army personnel the basics of using missiles as offensive weapons. Captured German missiles from WW II were utilized as training vehicles. An avid golfer, he was a long time member of the New Haven Country Club and won the men's golf championship at country clubs in New Jersey and Illinois. For several years he was the tournament director for the CT Women's Golf Assoc. He was an Emeritus member of the CT State Senior Golf Assoc. and served as a trustee on its board. Bill was a catcher for the Bradley University baseball team that played in the College World Series in 1950, and was later inducted into that school's Athletic Hall of Fame. The celebration of his life will begin on Sunday Nov. 17 at BEECHER & BENNETT, 2300 WHITNEY AVE. HAMDEN from 3-5 pm, and will continue on Monday Nov. 18 with a Memorial Service at the Lutheran Church of the Good Shepard at 11 am. In lieu of flowers donations may be made to the Hospital of Saint Raphael, 1450 Chapel St., New Haven, CT 06511, or to the Lutheran Church of the Good Shepard, General Fund, 3680 Whitney Ave. Hamden, CT 06518.