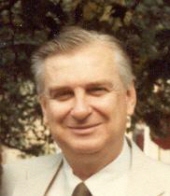 William Miller Loos, 78, beloved husband of 56 years to Margaret "Peggy" Withey Loos of Bethany, passed away on April 22, 2007 after a short illness. He was born in New Haven on May 11, 1928 to the late Leonard and Celia Miller Loos. Cherished father and father-in-law of Cecelia Dorsey of Branford, Christina Sachin of Waterbury, Margaret Loos-Cosgrove of Fairfield, Mary and Robert Petry of Richmond, VA, William and Carol Loos of Tacoma, WA, and Edward and Deborah Bessen Loos of Montclair, NJ. Devoted grandfather to Caitlin, Robyn, Matthew, Brian, Alexis, Westin, Liam, Bennett, Dexter, Shay, and Skylar. He was predeceased by his brother Leonard Loos. Bill grew up in the Newhallville section of New Haven and attended local schools. A baseball and basketball standout at both Hillhouse High School and UCONN, he was part of the New England High School Championship basketball team of 1946. Bill was drafted into the Philadelphia Phillies baseball organization in his junior year at UCONN and played professional baseball for 4 years. He co-owned the Clifford, Bang and Loos Insurance Agency in Hamden for more than 35 years and was honored by the Newhallville Association as Man of the Year. Bill was active as a coach in the Babe Ruth League and the Bethany, Orange and Woodbridge softball league and served as Chairman of the Boy Scout organization in Bethany. His warmth and humor will be missed by all whose lives he touched. GO SOX! Friends may visit on Friday, May 11th at BEECHER & BENNETT, 2300 Whitney Ave., Hamden from 5 to 7pm, with a Remembrance Service at 7pm. In lieu of flowers, contributions in Bill's name may be sent to the Connecticut Food Bank, P.O. Box 8686, New Haven, CT 06531.